Some Of The Unknown Materials Found At Monte Fire Revealed 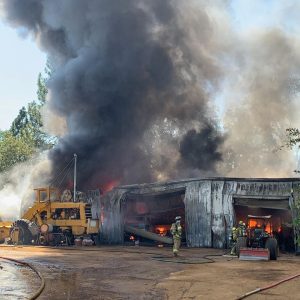 Soulsbyville, CA – More information is coming to light regarding the unknown materials discovered in drums at Wednesday’s Monte Fire in Soulsbyville.

Clarke Broadcasting reached out to Tuolumne County Environmental Health Director Rob Kostlivy, who was called to the scene to assist in cleanup efforts, regarding the possible toxic materials found there.

The blaze broke out around 3 p.m. in the 19500 block of Soulsbyville Road, between Draper Mine and Monte Grande roads sending black billowing smoke into the sky and injuring one man, as reported here. The next day it was learned that over 55 drums and pails were found with unknown material inside and the person injured sustained second degree burns to nearly half of his body, as detailed here.

Kostlivy divulged many of the materials were automotive-related detailing that the hazmat materials associated with the building fire included petroleum products, lead-acid batteries, ethylene glycol used in antifreeze, and burned tires. He went on to describe the property this way, “The site has many issues and challenging complexities. We have other contaminants scattered throughout the property.”

Kostlivy added that his department is working to mitigate those environmental complexities locally with Tuolumne County Fire, public health, and OES as well as Cal OES on the stateside along with the Department of Toxic Substances Control, Fish and Game Commission, and Cal/OSHA.

One concern being investigated is whether any of the hazardous materials reached the nearby Curtis Creek. Kostlivy rendered, “We are still assessing the situation.  There is a manmade pond on-site, which captured the majority of the runoff.”

Over the next several days, Kostlivy instructs the agencies will develop a comprehensive game plan and work with the owner to gain compliance for the hazardous materials found on the property. It is unclear whether that person will face any penalties at this time as Kostlivy points out, “We are still assessing the property. The property owner is entitled to due process.  He will have the opportunity to correct the problem unless he can’t correct it within a specified timeframe.” That time frame has not been determined yet.

If state and local officials have to clean up the mess, Kostlivy estimates that could cost the owner hundreds of thousands of dollars.