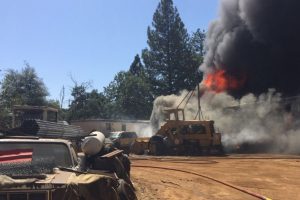 Soulsbyville, CA – New details are being released regarding Wednesday’s Monte Fire that broke out in a workshop in the Soulsbyville area – including that one man working on the property suffered second degree burns to over half his body.

Today, fire investigators from the Tuolumne County Fire Department sifted through the debris left behind for clues as to what sparked the blaze. They are interviewing the property owner and burn victim today, according to CAL Fire spokesperson Emily Kilgore.

The HAZMAT 4 crew out of Modesto was called in after several drums were found with unknown contents. They will assist in identifying the materials and if hazardous, properly disposing of them. Kilgore details some of the items found, “There were approximately 20 vehicles including heavy equipment such as tractors and backhoes. There were also 30 55-gallon drums, 25 5-gallon pails, and several commercial-sized compressed gas cylinders all with unknown contents.”

That has brought up concerns regarding possible leaks of the contents into nearby Curtis Creek. Currently, impacted stakeholders are being notified as they are identified. Kilgore discloses another problem, the property is listed as residential, but the unknown hazardous items are of “commercial” grade, “adding to the complexity of the incident.”

As earlier reported here, the flames broke out in a workshop filled with equipment and other materials just after 3:30 p.m. at a property in the 19500 block of Soulsbyville Road. Kilgore updates that the destroyed building was a “commercial” type and about 3,000 square feet in size. There were reports to Clarke Broadcasting regarding a possible explosion, something Kilgore could not confirm, “There’s not been any reports to CAL Fire that was any explosions, but part of the investigation will be to determine those kinds of things. That would include talking to any potential witnesses.”

The pictures show how flames were shooting out of the building, but incredible work by the ground crews keep the flames from spreading as Columbia aircraft hovered overhead in case they were needed. The fire was extinguished by 6:20 p.m.

Other resources assisting in the cleanup efforts are several Tuolumne County departments including the office of emergency service, environmental health, planning department, and administrator’s office.