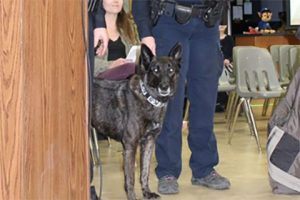 Replacing last year’s Mayor Amanda Folendorf is Joe Oliveira, who was the Vice Mayor for 2019. That position is being filled by Alvin Broglio for 2020. Both garnered unanimous votes from the council. Oliveira was appointed to the council in 2017, taking the seat of Susan Rudolph, and Broglio was elected in November of 2018, replacing Scott Behiel.

Following that vote, the council was happy to move to the next agenda item, honored a faithful four-legged safety servant to the city’s police force, K9 Thor. He was acquired from the Stockton Police Department to join the Angels Camp Police Department in 2016, as reported here. Using donations from the community, the Angels Camp Police K-9 Association, paid $4,000 for the Dutch Shepard. Now 9-years-old, and after a job well done, Thor will spend the rest of his day as the beloved pet of his handler, Officer McDearmid. His replacement, a 3-year-old Belgian Malinois named K9 Valkyrie, was sworn in afterward. Valkyrie was donated to the city by the same association and will also partner up with Officer McDearmid.