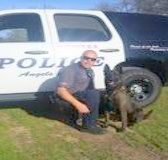 After several months and evaluating several dogs, last week, the Angels Camp Police K-9 Association, using donations from the community, paid $4,000 for Thor. He is a nearly five-year-old Dutch Shepherd. The canine comes with high praise from the Stockton Police Department where he was cross-trained for both patrolling and narcotic detection work. His previous owner left that department but made sure to find a good home for the proven K-9, according to Angels Camp Police.

Thor will team up with Sgt. Steven Poortinga, who as previously reported, lost his last K-9, six year-old Kain, due to sudden illness last year. Sgt. Poortinga and Thor will spend the next couple of weeks bonding and training for certification. Angels Camp Police hope to have Thor officially working the streets in about a month. No official swearing in date has yet been set for this newest addition to the force.