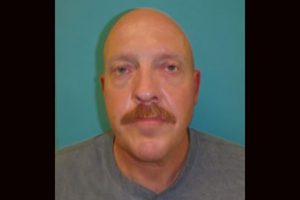 Sonora, CA – Finding discarded packaging in the bathroom of the Sonora Rite-Aid on Mono Way prompted store employees to detain a suspect, which led to his arrest for shoplifting and drugs.

Sonora police relay that a clerk spotted the suspect, 44-year-old Christopher Wade Phillips, on Thursday afternoon taking an item into the bathroom. Phillips was stopped while trying to exit the store with an FM/AM radio and earbuds hidden in his clothing.

When officers arrived, they searched the restroom and found the radio’s packaging that had been ripped open and thrown in a trash can. Phillips had outstanding warrants which allowed him to be searched by officers and less than a gram of methamphetamine was also discovered on him. He was arrested for petty theft and drug possession. The radio taken was only worth about $20, according to police.

Of note, as reported here in January of 2018, Phillips was arrested for burglary in connection with a break-in at the Amador-Tuolumne Community Action Agency (ATCAA) services center on North Washington Street.