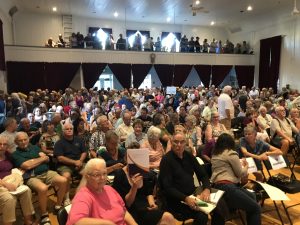 Sacramento, CA – The California FAIR Plan Association on Friday filed a petition for a writ of mandate with the goal of getting a judge to annul, vacate, or withdraw a state order.

FAIR Plan Association officials last week, as reported here, sent a letter outlining a litany of concerns, including that Lara’s order would have unintended consequences such as increasing insurance costs for all of the FAIR Plan’s policyholders.

Officials stated the suit was filed in Los Angeles Superior Court after attempts at working with the Department of Insurance to determine an alternative to the order that would expand options for California homeowners seeking property insurance “without unduly burdening them with additional risks and costs.”

Anneliese Jivan, president of the California FAIR Plan Association, maintained, “We appreciate the efforts of the Commissioner to address the impact of California’s devastating wildfires on homeowners.”

She continued, “Unfortunately, this order, as written, would negatively impact consumers and further destabilize the voluntary insurance marketplace because the order provides no incentive for the private market to offer insurance in areas at risk of wildfire. We regret having to take this action, but we will do everything we can to continue to protect policyholders and provide stability in the insurance marketplace.”

The writ argues that the order is illegal and would force the FAIR Plan out of compliance with its statutory mandate to provide basic property insurance while serving as a stabilizing force in the insurance marketplace and maintaining actuarially sound rates.

State and local officials and stakeholders groups in high fire risk areas, including Tuolumne County, continue to raise the alarm about what they describe as an epidemic of increasing homeowners’ insurance costs, nonrenewals and cancellations. Tuolumne County Association of Realtors (TCAR) conducted a survey that provided Lara’s office with quantitative data that was useful in further elevating the issue.

After getting Lara’s ear, his staff began scheduling town hall meetings in affected communities. He locally attended sessions in Sonora, as reported here, and in San Andreas. Co-hosted by state and local government officials, the speakers were confronted by standing-room-only audiences who were not shy about vocalizing their ire.