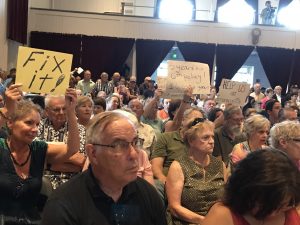 The town hall meeting hosted by Insurance Commissioner Lara was designed to update the community on efforts to combat the spiking number of residents losing fire insurance on their homes, and to hear feedback from those impacted.

It was a standing room only crowd, with some even watching from outside the building. Heckling from the audience was a common theme throughout the night, starting with the introduction from Sonora Mayor Jim Garaventa, as he was encouraged by hecklers to speed up his speech. Tuolumne County Supervisor Sherri Brennan spoke second, and requested civility, and thanked Insurance Commissioner Lara for his willingness to come to the county to host the event.

Lara then spoke for approximately 45 minutes explaining that the non-renewal rate since 2010 has been up 600-percent, and that 10 of the 20 most destructive fires in the state’s recorded history have occurred in the past three years. You can view video of some of his opening statements by clicking the video box.

Lara argued that the state’s current law requiring insurance companies to give policy-holders 45 day notice about a cancellation is too little, and he is pushing for the legislature to add an additional 180 days. He also argued that California’s “Fair Plan” provides insufficient coverage and is in need of changes. All of these ideas would have to be approved by the legislature, and signed by the Governor, to become law. Lara also spoke about a strike team he has created to help residents impacted.

Senator Andreas Borgeas and Assemblyman Frank Bigelow then took the microphone, and reemphasized concerns about the growing problem and promised to support efforts at the state capitol.

Then a deputy commissioner in Lara’s office took the stage, noting that around 100 people had submitted questions online prior to the meeting, and he prepared a slide show to address many of them. A couple of minutes into his presentation audience members started heckling him and yelling out that this was all information that was already known, and a waste of time to present.

Some of the hecklers started yelling for Senator Borgeas and Assemblyman Bigelow to come back on stage and speak about more specifics, and legislation, they will introduce or support. You can view a seven-minute video in which the lawmakers are going back and forth with audience members, as it was somewhat contentious at times, by clicking here.

Afterwards, Lara told Clarke Broadcasting the stories and feedback will be used when working to further craft legislation and proposals.

He added, “This is exactly why we are here, to listen to peoples concerns and to listen to their stories. It is not always what we may want to hear, but this is the people’s town hall and they have every right to express themselves the way they want.”

A similar type town hall meeting is being planned for San Andreas next month.