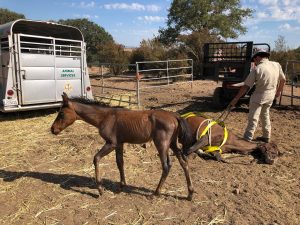 Mare unable to get up on her own and colt

Angels Camp, CA – A pony is a wish for many kids around the Christmas holiday and this year parents may be able to give that gift.

Clarke Broadcasting first reported back in August of last year on a case that began with the seizure of four emaciated horses, two mares and two colts, from a property on the 9000 block of Warren Road in Valley Springs. One of the mares was lying on the ground so weak a special harness had to be used to get her up and she was later euthanized. In the end, nearly 37 threatened horses were eventually taken from the pasture.

The good news is the animals have been nursed back to health and are ready for adoption. However, Calaveras County Animal Services Manager Evan Jacobs relays, “These are not broke horses. They are not halter broke either. They all show potential, but we don’t know how long it is going to take to get them to be in a place where you can handle them. So, this is going to be a lifelong commitment.” He cautions anyone looking for a gentled horse to not choose one of these.

Another consideration, according to Jacobs, “Most of the mares we suspect are pregnant. So, anyone who actually adopts a mare will most likely get a foal sometime in the next couple of months.” He notes that it will be helpful if potential adopters have experienced in foal deliveries. Additionally, right before speaking with us, Jacobs learned that one of the mares considered to be at risk for giving birth was accepted by the U.C. Davis Veterinarian School.

Along with Friends of Calaveras Animal Services (“FOCAS”) the county is having an adoption event on December 15, Sunday, from 1 p.m. to 4 p.m. at the Calaveras County Fairgrounds off Highway 49. The horses have been housed there since they were seized, but Jacobs relays that they need to be removed by January 31st to prepare for the 2020 Calaveras County Fair and Jumping Frog Jubilee.

There are about ten mares and the adoption fee for each is $150. It is $300 for studs, which number between 15 and 20. Jacobs relays that although four colts were taken in the property seizure, they are currently in foster care and are not ready for adoption, but those interested can inquire at animal services.

In terms of the adoption event, Jacobs stresses that it is actually more of a showing as anyone can fill out an application, but the horses cannot be taken that day. It will require more of a process that includes records and reference checks from a Veterinarian, along with a home inspection. “The last thing we want to do,” Jacobs notes, “is place any of these horses in the same type of predicament or something worse.”

Once those requirements are met, the horses will get a fresh start at a new home. Any horse not adopted will remain in foster care until it finds a forever home.