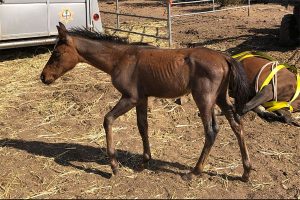 As we earlier reported here, on Tuesday, Calaveras County Animal Services and other assisting agencies responded to the call. As Officer Rebecca Andahl tells Clarke Broadcasting, the property was within the 9000 block of Warren Road in Valley Springs.

“Upon arrival, Animal Services personnel discovered approximately 30 horses of all ages, most of which were in need of food and proper care,” she states. “Working with a veterinarian and with the assistance of Calaveras Consolidated Fire District personnel, Animal Services staff immediately seized four horses that were in immediate need of proper care and emergency medical treatment in order to protect the horses’ health and safety.” Regarding their conditions, she adds, “Right now they are all too down for us to come to a conclusion on what’s going to be there future.”

She adds, “All four of the horses are now receiving care under the supervision of Animal Services and a veterinarian, and information regarding the case will be forwarded to the DA.”

Anyone with information about animals in the area of the seizure is encouraged to call Animal Services (209) 754-6509.

Under the penal code, post-seizure of animals, an owner has ten days to request a hearing, which must be held within 48 hours, excluding weekends or holidays. Clarke Broadcasting will provide updates to this story as they become available.

Also on Tuesday, Calaveras Animal Services were called to a property in Copperopolis where sheriff’s officials had raided an illegal marijuana grow. At the site, 150 chickens with 100 being roosters were found in small pens, some with living and dead birds in them, as reported here.