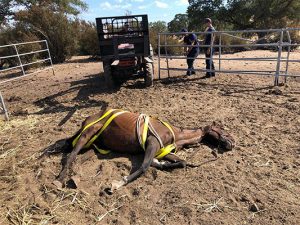 Mare unable to get up on her own

Burson, CA – The disturbing pictures in the image box of an emaciated horse and colt are what Calaveras Consolidated Firefighters and Calaveras County Animal Control officers discovered at a property in Burson — and now they’re looking for the owner.

In all, there were four horses, two mares and two colts, and all were undernourished. One of the mares was found lying on the ground unable to get up on her own. Firefighters used large web straps to carefully raise the mare to her feet. A veterinarian was called to the scene and administered some medicine to the horses that were then taken to a veterinarian facility in Angels Camp.

While animal services is trying to locate the owner, several other horses are also being monitored. Clarke Broadcasting reached out to that office to find out if any animal cruelty or abuse charges will be brought against the owner, but the office was closed. Additionally,  calls to the Calaveras County Sheriff’s office and Calaveras Consolidated Firefighters went unanswered.