Update: Lights Out In Copperopolis, Again 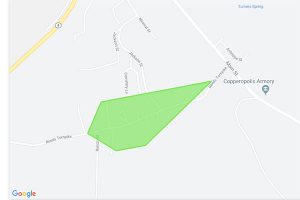 Update at 11:25 a.m.: PG&E reports the power has been restored for more than a handful of customers without electricity since 5 a.m. Down power lines along Reeds Turnpike off O’Byrnes Ferry Road near the Copperopolis Armory and Highway 4 keep those addresses in the dark for over five hours.

Update at 8:35 a.m.: PG&E has pushed back the projected repair time from 8:30 to 11 a.m. Additional information on the power outage can be viewed below.

Update at 6:15 a.m.: The CHP has shut down Reeds Turnpike at O’Byrnes Ferry Road. Further details on the outage are below.

Original post at 5:35 a.m.: Copperopolis, CA — More than a handful of PG&E customers are waking up without lights this morning in Calaveras County.

The power outage is in the Copperopolis area running along Reeds Turnpike, off Main Street/O’Byrnes Ferry Road near the Copperopolis Armory and Highway 4. The company reports a crew is accessing the cause. However, the CHP is reporting that power lines are down across the roadway at O’Byrnes Ferry Road and the Reeds Turnpike intersection. The electricity went out just after 5 a.m. and the estimated restoration time being given is 8:30 a.m.

As reported here, Monday afternoon over 6,000 customers were involved in an outage that stretched from Copperopolis to Jamestown and towards Yosemite. Some 2,000 of those were in the Copperopolis area. The outage lasted nearly two and a half hours. It is unclear if yesterday’s gusty winds were the cause of the outage.