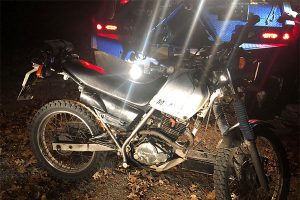 Sonora Police Chief Turu VanderWiel reports that an officer spotted the motorcyclist riding “recklessly” on Sanguinetti Road near Safeway at around 10pm. The rider refused to pull over and led the officer on a chase to Old Wards Ferry Road, over to Greenley Road, and eventually to Cabezut Road.

Chief VanderWiel adds, “The motorcycle was weaving all over the roadway, crossing over to the oncoming lane of traffic, and speeds through town were ranging from 30-55 miles per hour. Several stop signs were ran by the motorcycle.”

The officer then lost sight of the motorcyclist, but he was spotted by officials a short time later on Highway 49 near Preston Place. The chase then went towards Sawmill Flat Road and over to Big Hill Road.

Officials lost sight again of the motorcyclist, and the Tuolumne County Sheriff’s Office became involved in the pursuit by that point.

Chief VanderWiel says, “It is my understanding that a citizen in the area heard some noise on her property, called it in, and it turned out to be the motorcyclist that was running from our officers earlier in the evening.”

Arrested in the Big Hill area was 19-year-old Devon Nathaniel Hensley of Columbia.

Chief VanderWiel adds, “Mr. Hensley did admit to evading law enforcement last night, and to a hit and run several days prior that he was involved in.”

Chief VanderWiel confirms the earlier hit and run was a story we reported on this week involving a rider involved in a crash on Yankee Hill Road that injured a female passenger. Click here to view the earlier story.