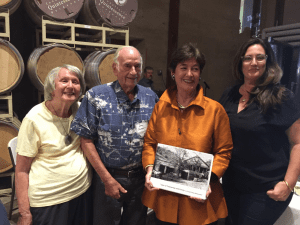 San Andreas, CA – A love for Mother Lode history sparked a family reunion of sorts during a former State Treasurer’s visit to the Mother Lode.

It happened during a recent Calaveras County Historical Society fundraiser-evening as attorney-politician Kathleen Brown, also well-known as the youngest sister and daughter of two former California governors, appeared as the special guest speaker.

With the Chatom-School Street winery barrel room as a backdrop, the former treasurer explained how her genealogical sleuthing across continents, helping uncover the French-Italian roots of former First Lady Bernice Layne Brown’s family, was borne out of a desire to fill in the stories of her mother’s ancestors’ past.

Bernice Brown’s family tracings include her great-grandmother, French émigré Zelia Rouhaud, who arrived in the Vallecito area of Calaveras County four generations ago. Kathleen points out that this part of the family tree is as colorful as the Browns’ history on the side of Governor Pat Brown’s grandfather, German immigrant August Schuckman, whose Colusa property, four generations later, is still both in the family, off the grid, and home to her brother Jerry.

As reported here, while still governor, Jerry Brown paid a visit to Vallecito, looking for vestiges of the old Cuneo general store that Kathleen herself had visited some years before. While attempting to locate the property, he encountered and befriended Vallecito resident Joel Metzger, who humorously recounted the story (click here to view it) ahead of introducing Kathleen to the audience.

The Browns’ Calaveras roots begin with Zelia, who traveled from France in 1854 with her brother Hippolyte, a French diplomat. It was in Vallecito where she met and married Italian immigrant and storekeeper Giovanni Baptiste Cuneo.

A Common Past Through The Cuneos Of Calaveras

The Browns share a living family connection through Cuneo family members who continue to make Calaveras County their home. That night, Brown and her daughter Sascha Rice, a noted filmmaker, public speaker, and teacher dined with Don Cuneo, 95, and his niece Fritzi Cuneo Dorroh, 85. Don, a World War II Navy vet, and past county supervisor, formerly operated a butcher shop and owned the Black Bart Inn. Fritzi, a local historian, is the author of “Tales Of Calaveritas,” encapsulating remembrances and histories from the Cuneo and Costa families and community that harken back to the early 1850s.

As for Giovanni and Zelia’s circa 1850 Cuneo Building, aka the French Store in Vallecito, while it was dismantled some years ago for public safety reasons, the iron doors and rhyolite tuff stone blocks are still around, albeit, in storage. Upon his death in 1864, Zelia ran the store for several more years before remarrying and moving away, eventually to San Francisco, where both sides of the Brown family roots converged.

About her experiences threading together her family’s past, Kathleen shared with the audience, “It’s kind of like reading a mystery story or a novel, but it’s about you, and finding clues is exciting!”

Recalling one vestige, a circa 1864 inventory list from her great-great-grandfather Giovanni Baptiste Cuneo’s shop at the time of his death around 1864, she enthused over what those who came through the area during the Gold Rush might find in the way of provisions.

Brown noted that according to the list, “It was an unbelievable range of everything from picks and shovels to food, flour, sugar, vermicelli, and champagne.” She enthused, “It’s like an archaeological dig –- you get a flavor of what life was like at that moment in time.”

To view a video snippet from her talk, click the link in the image box.