Candidate Drops Out Of Congressional Race Ahead Of Calaveras Forum 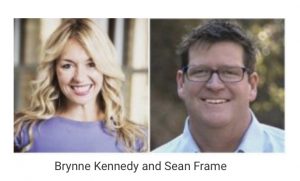 Angels Camp, CA — There was a scheduled forum later this month to be put on by the Calaveras Democrats to highlight the two candidates hoping to face incumbent Tom McClintock in the 2020 general election.

We reported in May that two Democrats had declared intentions. Sean Frame, a Placerville Union School Board member, and founder of the group The El Dorado Progressives, has now changed course and suspended his campaign.

That leaves Brynne Kennedy as the leading Democratic candidate in the race. She recently relocated from the San Francisco Bay Area to the Sacramento region. She was the founder of the tech company Topia which is a provider of global mobility management software.

The Calaveras Democrats had planned for both Kennedy and Frame to be at a September 25 public forum at Bret Harte High School that was going to be moderated by Supervisor Merita Callaway. Now that Frame is out of the race, the forum has been canceled.

The District Four House seat, held by the Republican McClintock since first being elected in 2008, spreads from Lake Tahoe, through the Mother Lode, across Yosemite, and into Kings Canyon.