Candidates Lining Up To Challenge McClintock In 2020 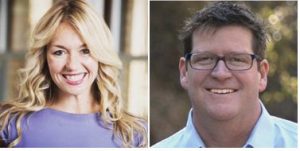 With 2020 on the horizon, the latest candidate announcing plans to challenge McClintock is 35-year-old Brynne Kennedy, who recently relocated from the Bay Area to the Sacramento region. She is the founder, former CEO, and member of the board of directors, for the tech company Topia. It was founded in 2010, and is a provider of Global Mobility Management software, with headquarters in San Francisco and London.

Another Democrat who earlier announced intentions to run is Sean Frame, a Placerville resident, who has served seven years on the Placerville Union School Board. He also owns a film production company and is the co-founder of a local activist group, the El Dorado Progressives.

The District Four House seat spreads from Lake Tahoe, through the Mother Lode, across Yosemite and into Kings Canyon.

McClintock, a senior member of the House Natural Resources Committee, was first elected to Congress in 2008. He also has 22 years of experience serving in the California legislature.

The top two vote getters in next year’s March primary election, regardless of party affiliation, will square off in the November general election.