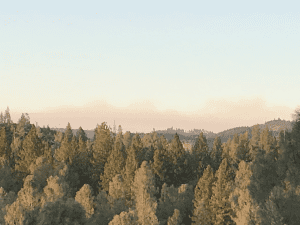 Groveland, CA — You may be noticing a little drift smoke this morning originating from a burn in the Rim Fire footprint.

We reported earlier this week that officials plan to burn up to 700 acres over the next week in the Groveland Ranger District. The area is west of Cherry Lake and 12 miles southeast of Twain Harte.

Groveland District Ranger Jim Junette reports that 98 acres were successfully burned overnight. The burn area will be monitored throughout the morning and early afternoon, and then more planned ignitions will start at around 3:30pm.

He adds, “We’re anticipating that we will be burning through either Tuesday or Wednesday night (of next week). We are getting really favorable relative humidity in the evening and temperatures are dropping down into the low sixties. We hope to continue with about 100-125 acres per night.”

Junette is optimistic that smoke will be relatively minimal. However, you may notice a little bit of down canyon drift smoke at times, especially during the early morning hours.