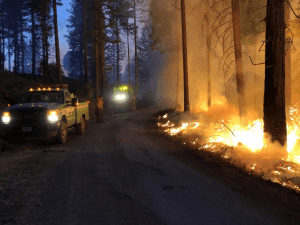 Groveland, CA – Plans are underway for a 700-acre burn in the Rim Fire footprint where another fire has been burning underground for at least five years.

Stanislaus National Forest officials acknowledge they do not know what triggered the incident that was dubbed the Rosasco Fire but that it was discovered in 2014, and that a fuels reduction project is slated around it on the Groveland Ranger District for firefighter safety and resource protection reasons.

Plans are to ignite acreage around the underground fire during a window that could be anytime between today and Sept. 12, depending on fire and weather conditions among other variables Firing operations will be scheduled during the evening hours when there are cooler temperatures and higher relative humidity.

While the section is in a remote forest area west of Cherry Lake and about 12 miles southeast of Twain Harte, the fire may be visible at night from Highway 120, so forest employees familiar with the operation will be available in areas where the fire will be visible in other to answer questions from the public.

Groveland District Ranger Jim Junette points out, as the area is within the Rim Fire burn scar, several standing dead trees and snags remain. “We are removing fuels and the threat they pose, so the underground fire can’t escape onto the landscape,” he explains. He adds, “Firefighters can’t examine what fuels are burning [in the Rosasco fire incident] because the ground near where the fire is burning is too dangerous for them to take a look.”

Since the Rosasco Fire is an existing wildfire, Junette maintains, that the firing operations going on near it cannot be termed a prescribed burn, because the definition of that activity includes that it is conducted when there is no fire on the landscape before firefighters lay down a fire line.

Officials report that the fire has escaped above ground in 2014 and 2015, burning a total of 12 acres between the two incidents. Although the cause is unknown, Junette shares that the burning materials may be from an old railroad site. “Our records show this area was near part of the old Westside Railway, which went out of business in the 1960s.”