It’s Time To Be On The Lookout For Rattlesnakes 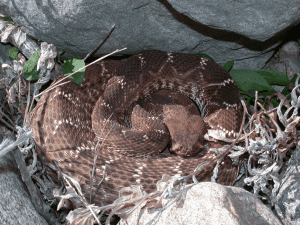 Sonora, CA – Although the weather is trending a bit cooler than last year, wildlife officials are sharing a heads up that April is when snakes, including rattlers, begin to emerge.

As reported here, last April was a very active one for rattlesnakes due to warmer temperatures and an estimated increase in the local population. Due to several reports of early in the season bite cases, the California Poison Control System (CPCS) issued an alert, indicating the number of assistance calls seemed uncharacteristically high. Too, at least one local veterinary clinic reported seeing an unusually high number of canine patients by the end of that month.

California Department of Fish and Wildlife (CDFW) officials say it is time to be on the lookout for rattlesnakes and to not only give them a wide berth, know what to do in the event of a bite.

Rattlesnakes are widespread in California and are found in a variety of habitats from coastal to desert. They may also turn up around homes and yards in brushy areas and under woodpiles. Most bites occur between the months of April and October when snakes and humans are most active outdoors. Officials stress that rattlesnakes are generally not aggressive and will likely retreat if given room and not provoked or threatened.

In fact, most bite cases happen when a rattlesnake is handled or accidentally brushed against by someone walking or climbing. As wounds require immediate medical treatment and can occasionally be fatal, experts explicitly warn folks not to handle a rattlesnake – even if you think it is dead. Although it might seem odd, a severed head on its own can bite.

On behalf of these often misunderstood and unappreciated creatures, CDFW’s Keep Me Wild program coordinator Lesa Johnston shares, “Snakes really get an unfair bad rap, when they actually play an important role in California’s ecosystems.” She adds, “Like most wild animals, snakes prefer to keep to themselves and are not naturally aggressive. Taking the time to learn about safety precautions before going outdoors can make all the difference.”

• Wear boots and long pants when moving through areas where snakes may reside
• Stay away from underbrush and tall weeds and travel along trails and paths
• Do not touch or disturb a snake, even if it appears dead
• Carefully inspect logs or rocks before sitting on over stepping over them.
• Never visit remote areas alone and have someone along who can assist in an emergency
• Teach children to respect snakes and to leave them alone
• Consider a rattlesnake vaccine and/or avoidance training for your dog(s)