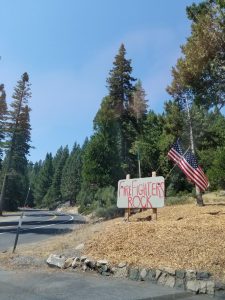 Tuolumne County, CA — The Pacific Crest Trail is open for public use once again now that the threat from the Donnell Fire’s flames has passed.

Stanislaus National Forest Fire officials attribute the trail reopening to minimal growth this week with just 150 acres burned since last Sunday.  The blaze is holding steady at 36,400 acres and the containment has risen to 87-percent.  While Incident Command reports concerns over this weekend’s reported rising temperatures and possible afternoon thunderstorms, they note that it is not as hot as last week. We will continue to update you with any threats over the fire area.

As reported here, forest officials have announced that on Monday an update map will be released with specifics to the remaining closure area. Incident Command warns that active fire, fire suppression actions, hazardous standing trees, and risk from rock fall are clear reasons why the public needs to stay clear of the remaining fire closure area.

A timeline of our Donnell Fire news stories is here.