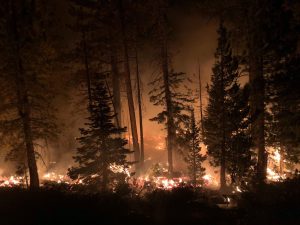 Update at 9:30 p.m.: The Donnell Fire on the Stanislaus National Forest saw no movement on its containment or acreage, which held at 20-percent and 27,769 acres while further details were released on destroyed structures.

To date, 135 structures have been destroyed and 220 remain threatened. A summary of Donnell Fire news stories is here. Incident Command reports that the initial fire assessments are complete for all recreation structures along the Highway 108 corridor. The conditions of all cabin/resort facilities have been relayed to permittees. With regards to the region around the Dardanelle Resort, fire officials detail that the flames destroyed 14 of 16 cabins in the Wagner Tract, 36 of 57 cabins in the Brightman Tract, 2 of 2 cabins in the Buena Vista Tract, and 1 of 10 cabins in the Bone Springs Tract.  Areas with no loss of structures include: Baker Station or within Riverside, Cedar Grove, Deadman, Baker, East Douglas, West Douglas, and Twin Buttes Tracts.

While much of the historic Dardanelle Resort was lost, Incident Command is determined to stave off the flames from scorching another landmark. On the eastern flank of the fire, a task force of firefighters are staged in Kennedy Meadows providing structure protection and constructing line north of the resort on Highway 108 towards Douglas Creek in an attempt to slow the fire’s forward spread.

A potential threat still facing firefighters is the active flames and hazard trees, according to fire officials. Today, crews started cutting line between the Bennett Juniper and Haypress Meadow. Four Wildland Fire Fighting crews, deployed to fight the flames in remote areas, are now camping on the western edge of the fire between the end of Fence Creek Road (Forest Service Road 6N06) and Spicer Reservoir in the Carson-Iceberg Wilderness.

Areas that remain closed on the forest include: the Carson-Iceberg Wilderness on the Summit and Calaveras Ranger Districts, Spicer Reservoir, Highway 108 at Eagle Meadow Road to the top of Sonora Pass and Highway 4 and Highlands Lake Road (Forest Service Road 8N01) junction. The Pacific Crest Trail is also shut down between Highway 108 and Highway 4 for public safety.

Details regarding a community meeting and evacuations can be viewed below.

Original post at 9:30 a.m.: Tuolumne County, CA : A calmer night for crews battling the Donnell Fire in the Stanislaus National Forest, but it is not expected to stay that way as the flames are on a path towards two landmarks.

The fire’s size grew by 955 acres to 27,769 and the containment remained 20-percent (See fire map below). Unified Command will hold a community meeting to update the public regarding the fire’s activity and fire suppression efforts. It is Monday, August 13, from 5 to 6:30 p.m. in the Fellowship Hall at the Word of Life Church located at 24630 Highway 108 in Mi-Wuk Village.

Crews continue to work on structure protection ahead of the fire as it slowly creeps in an easterly direction at Kennedy Meadows and northeasterly leaving its barren burn scar behind in the Disaster Creek area. Incident Command reports that efforts to protect the Bennett Juniper are encouraging as firefighters are making headway cutting hand and dozer line across Eagle Drainage.

A drop in the temperature coupled with a rise in humidity today will make it ripe for a fuels driven not wind driven blaze, according to fire officials, who adds that with the landscape so low on fuel moistures, spotting is a concern.

Mop up and hazard tree removal will continue in green pockets between structures along Highway 108. Wildland Fire Fighting crews camping out in the remote areas of the fire will continue working on the south side of Spicer Reservoir in Carson-Iceberg Wilderness.

135 structures have been destroyed and 220 remain threatened. Resources assigned to the blaze include: 10 hand crews, 5 helicopters, 47 engines, 5 dozers, 9 water tenders. Incident Command reports that more hotshot crews are heading to the scene, but admit more resources are needed, as reported here Saturday.