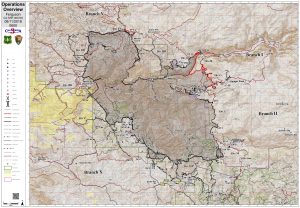 Update at 9:45 p.m.: The Ferguson Fire burning in Mariposa County has increased by 508 acres for a total of 95,952 and the containment remains 82-percent. Further details on the fire’s activity and Yosemite openings are below. A timeline of news stories about the Ferguson Fire is here.

Original post at 8:30 a.m.: Mariposa County, CA – Minimal fire activity kept the Ferguson Fire in check with the acreage holding at 95,444 acres and the containment remains at 82-percent.

When the humidity rose and where conditions allowed, crews conducted tactical burning operations along Wawona Road towards Elephant Rock. Firefighters were also able to hold the line in areas where active fire burned during the day on Friday.

As the temperatures rise today, Incident Command projects that the fire will become more active, but they advise that contingency plans are in place to keep the flames from spreading further into Yosemite National Park. Those entail targeting uncontained flames along the Wawona Road, which remains the prime focus of the fire operations. While crews have forged their way to within a tenth of a mile of Elephant Rock, there is still substantial work that needs to be accomplished in order to open Wawona Road, according to fire officials.

To this point, all spot fires and slop over flames that crossed containment lines have been contained with the help of helicopters. Concerned with the very dry vegetation and to help prevent further spot fires, retardant was sprayed on the east side of Wawona Road to inhibit embers from sparking additional blazes. 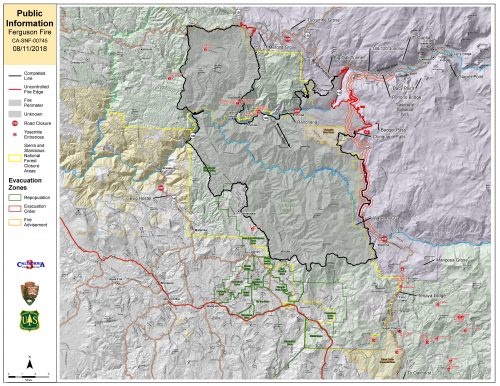