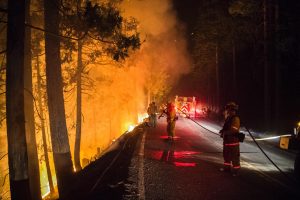 Update at 8:45 p.m.: Fire crews are keeping the Ferguson Fire in check as the acreage remains at 95,444 acres while the containment increased slightly to 82-percent.

Incident Commands indicate that the main focus today was the Elephant Rock and Badger Pass areas. They detail that firefighters installed an extensive sprinkler system at the base of rock to reinforce the hand line already in place. A timeline of Ferguson Fire news stories is here.

As temperatures rose this afternoon, so did the fires activity along the service road near Chinquapin. Several small spot fires broke out but air support helped ground crews contain them and some flames that went beyond the planned fire line.

Tonight’s strategy is to continue burning operations as soon as the humidity rises.  Further details on areas opening to the public this weekend can be viewed below and click here for details an earlier story regarding the reopening of main attractions in Yosemite next week.

Update at 1:52pm: No longer under Ferguson Fire impacts some recreational areas along the Merced River are back open today.

According to Bureau of Land Management (BLM) Mother Lode Field Office officials, McCabe Flat, Willow Placer and Railroad Flat campgrounds are back open. The Briceburg Visitor Center will reopen on Friday, Aug. 17 and remain so through Labor Day weekend, they add. While Highway 140 through the river canyon corridor from Briceburg to the Yosemite National Park is open to the public, travelers should remain aware that due to emergency equipment still in the area, speed limits may be reduced.

On July 15, the BLM temporarily closed the Merced River Recreation Area due to the area’s proximity to the wildfire, which  currently stands at 95,444 acres and 80 percent contained.

It should also be noted that BLM Mother Lode Field Office managed public lands in 14 counties throughout the Sierra Nevada foothills still remain under Stage 2 fire restrictions, which until they are lifted, prohibit recreational target shooting and campfires.

Update at 9:10am: Thanks to continued containment of the Ferguson Fire, the Tuolumne County Sheriff’s Office has now lifted the evacuation advisories for the areas east of Cherry Lake Road and west of Crane Flat Road.

Original story posted at 7:35am:  Yosemite, CA — The acreage edged up slightly and the containment held steady through the night on the Ferguson Fire in Mariposa County.

This morning it is 95,444 acres and 80-percent contained. Over 1,500 firefighters remain assigned this morning, but the number will likely continue to drop over the coming days and weeks. There are 104 water tenders, 14 helicopters, 14 crews and 17 dozers. Over the coming days crews will continue to work on burning containment lines along Wawona Road in the Grouse Creek drainage.

Yosemite Valley is expected to remain closed to visitors through this weekend. However, park staff and residents were allowed to return on Wednesday. Highway 120 is open through Yosemite, but there is no access to the valley. Highway 140 is closed east of the entrance gate and Wawona Road is only open to locals going to and from their residences.