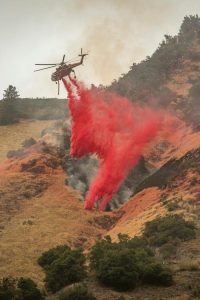 This is Day 10 of the Ferguson Fire, more updates are here.

Mariposa CA – As the acreage climbed in the Ferguson Fire, burning on both the Sierra and Stanislaus national forests, by nearly 2,000 acres to a total of 32,484 acres, the threat to structures surged from 216 to 3,494. There remains just six-percent containment.

The explosion in the number came with the afternoon mandatory evacuation order for Old Yosemite Road, southwest of the Buck Meadows area in Mariposa County, as the fire moved north toward the Montgomery Gulch and Anderson Valley vicinities, as reported here. Defense of structures in the Jerseydale area continues.

Another two firefighters were injured battling the blaze today bringing the total to six, but details on their injuries have not been released. A public visitation was held today in Modesto for fallen Heavy Fire Equipment Operator Braden Varney. Tomorrow there will be a Celebration of Life, also in Modesto, details can be found by clicking here.

Incident Command shares that resources are coordinating with Yosemite National Park fire officials as the southeastern corner of the fire, burning in the timbered areas of Granite Ridge spreads toward the Chowchilla Mountains.  Together crews are working to find the best areas to establish indirect control lines. Crews are working to prepare future burnout operations with additional hose lays to strengthening the line that runs from El Portal southeast toward Wawona Road and Yosemite National Park, according to fire officials.

Overnight, the strategy is for ground crews to work on building an indirect line east on Henness Ridge for firing operations when weather conditions become favorable. Fire officials relay, “North of the Merced River, resources will improve direct line that is anchored in to the Merced River on the west side. Indirect line construction will continue, utilizing the Stanislaus National Forest road system where available.” Additionally, following firefighting operations on the west side, crews are mopping up while continuing to strengthen control lines.