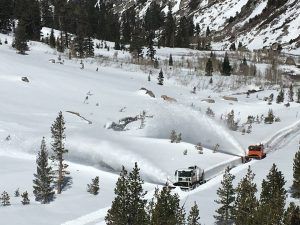 Sonora, CA – As it earlier predicted, Caltrans reports that by around noon today the snow removal crew working on Highway 108 cleared it to the Kennedy Meadows closure gate and swung open the Eagle Meadows gate.

Officials say it appears that the 9,624-foot Sonora Pass summit will likely be ready to open by the traditional target date of Memorial Day Weekend, just in time for fishing season.

In the agency’s photo sharing of the Highway 108 activities, Caltrans contrasts what a difference one year makes; a side-by-side set of shots from last and this year taken of a snow measurement stake around the same period show that while it is clearly visible now it was completely buried in 2017. To view the photos, click into the image box slideshow.

As reported here, due to the epic 2017 Sierra winter storm season, Sonora Pass did not open until June 13. Highway 4 Ebbetts Pass remained closed until just before the July 4th holiday preceded just a few days earlier by Highway 120 Tioga Pass.

According to Caltrans, current plans are to have Highway 4 Ebbetts Pass open by the Memorial Day holiday weekend as well. Currently it is closed from the east end of Lake Alpine.

Yosemite National Park, which is responsible for snow clearing on Highway 120 at Tioga Pass, indicates that it still remains closed at Crane Flat.