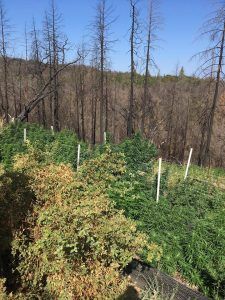 San Andreas, CA — Calaveras sheriff’s officials are reporting the demise of another illegal grow of 788 plants in the Mountain Ranch area that they recently targeted.

Using a rough-estimate dollar figure of $3,000 per plant, the grow represents approximately $2.6 million in street value pot  Enforcement officials, including from CAL Fire noted the environmental violations as part of the visit. According to the sheriff’s office one subject, Michael Braley, 42 of Las Vegas, was arrested during the process on an out-of-county no-bail misdemeanor warrant.