‘Dismantling’ Underway At The Highway 120 Bridge 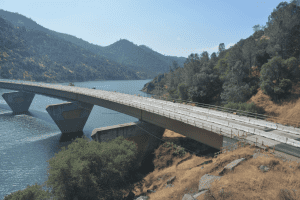 Sonora, CA – As Caltrans’ ambitious Highway 120 James E Roberts Bridge renovation refocuses on the topside in its final stages some onlookers are questioning what appears to be dismantling underway.

What the public has actually been seeing for about a week is the removal of construction decking that was being used for working on the underpinnings of the nearly $21 million project. As reported here, it was back in July that motorists were querying as to why work crews seemed to have disappeared from the construction site when actually workers were busily painting away beneath the span.

As far as how things are going, progress-wise, Caltrans District 10 spokesperson Rick Estrada says that, despite a wet and wild winter, the project remains on track. In fact, he confides, “Based on the progress being made we are optimistic that the end date will be ahead of the originally scheduled date for completion that was to come before the Thanksgiving holiday.”

Asked if that might be sometime before November he demurs, chuckling, “As soon as I say ‘October’ it is going to rain or something. That is always our concern about moving dates up — and the catch of committing — but what I can say, based on the progress that we have made…we are optimistic that we will be bringing this in ahead of time.”

Outlining the to-do list, Estrada shares, “Over the next few weeks the [temporary construction] decking on the side of the bridge will disappear — and [people] will see the new bridge rails go up, and the good news is that those are already in-house.” Following the installment of the new rails will be the rollout of a polyester overlay onto bridge deck. “Essentially that is the ‘final coat’ of the road – makes it smooth…reliable, makes it last,” he explains. “[The crew chiefs] are looking at doing that possibly in the first half of October.”

With a good four to six weeks of work left, Estrada maintains that it is still too early to determine if the bridge will come in ahead of budget. “A lot of work still needs to be done — it’s not the big stuff but it still needs to be done,” he states. For a current motorist’s eye view of the span click into the image box slideshow.

Based on the current work schedule, Estrada does not anticipate any more overnight closures of the span, emphasizing that motorists will still be subject to the customary ten-minute delays under 24/7 automated one-way traffic controls until after crews address a final “punch list” of activities during a series of essential final inspections and tests.

In the end, Estrada opines that the bridge will befit the region and the gateway that it provides to the visitors’ mecca also known as Yosemite National Park. By the way, the span, originally erected in 1971 and known as the Tuolumne River Bridge, was one of many designed under the auspices of its eventual namesake, civil engineer James E Roberts, a former Caltrans chief engineer; it was back in 2007 that the state legislature passed a resolution to rename the structure in his memory.