What’s Going On At The Highway 120 James E Roberts Bridge? 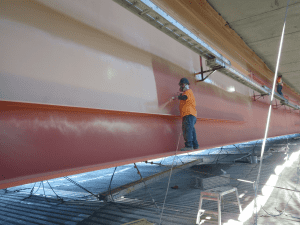 Sonora, CA — Caltrans officials responded today to Clarke Broadcasting’s query regarding complaints from locals about the perceived lack of construction activity on the Highway 120 bridge by Lake Don Pedro.

The nearly $21 million James E Roberts Bridge renovation project, which has had both sides of the span under 24/7 automated one-way traffic controls for many months now, is expected to continue creating ten-minute traffic waits until shortly before completion of the extensive work scope, anticipated sometime in November.

Due to calls from irritated commuters who reported not seeing anyone on the job, Clarke Broadcasting reached out to Caltrans spokesperson Rick Estrada. He affably comments it makes sense for drivers to wonder where the workers are — since right now, they are literally out of sight — under the bridge, painting the structure (as viewable in the image box slideshow photos).

Come September, crews will proceed to installing the permanent barrier railing Estrada shares, adding that the last major move likely in October will be to provide a final one-inch polyester-concrete overlay coating that will smooth the surface and remove any feeling of bumps between the horizontal structural span panels.

As to work lapses, Estrada maintains that aside from weather impacts, such as excessive heat and lightning, the personnel under contract by Golden State Bridge Company are pretty much dedicated to the project. “I cannot really foresee where a project elsewhere or something else going on would impact the progress of this bridge,” he states. Overall, he says, “While it is always difficult when there is roadwork going on and you do not see it ahead of you…what is different is right now the work is being done underneath…trust us, we are under there painting — and we are really optimistic about the completion date this fall.”