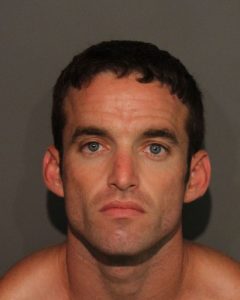 San Andreas, CA — Calaveras sheriff’s officials say in the process of serving two search out-of-area warrants detectives were able to take into custody a suspect in a four-boat theft at a local lake.

In the arrest, made yesterday, officials charged 29-year-old Justin Labass of Oakdale with grand theft, burglary, possession of stolen property and possession of ammunition by a felon. He was on post-release community supervision and is now being held in the Calaveras County Jail on a $105,000 bond.

As previously reported here, deputies responded Aug. 31 to a report of four watercraft being stolen from the Poker Flat and Conner Estates areas. Three were later recovered on the lake, stripped of valuables and left floating. Sheriff’s officials say the fourth, a 2006 North River fishing boat CF#0577RL is still missing.

Warrant searches were made on Woodland Avenue in Modesto and D Street in Oakdale, where Labass was ultimately found and taken into custody. Detectives also recovered numerous items that were positively identified as stolen from the boats. They additionally report finding other pieces relating to several other theft cases from the Copperopolis area.

The Calaveras County Sheriff’s Office emphasizes the importance of community cooperation, tips and access provided to private surveillance footage from citizens’ security systems to the investigation. Thanking the public for their assistance officials are calling it a great example of “community policing.”