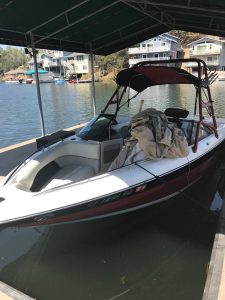 One of four stolen boats recovered on Lake Tulloch

Copperopolis, CA – Three of four stolen boats were found stripped and floating on Lake Tulloch Thursday, now detectives are asking for the public to keep an eye out for the lone vessel over the Labor Day weekend.

Calaveras County Sheriff’s Office Marine Safety Unit responded to the lake after a caller reported that four boats had been stolen. Investigators found
that the thieves had stripped three of the vessels of any valuables and set them adrift.

A fourth boat has not been recovered prompting a call for the public’s help, especially during the busy holiday weekend, to locate it. Sheriff’s officials describe it as a White 2006 North River fishing boat with a CF 0577 RL registration number.

The Sheriff’s Office is asking for anyone who may have witnessed the thefts or that may have video surveillance footage during Wednesday evening into Thursday morning to contact the Calaveras County Sheriff’s Office at (209) 754-6500.