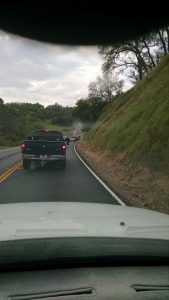 Valley Springs, CA – A man and a woman were seriously injured in a crash on Highway 12 in Calaveras County – and it was clear the male driver was drunk, according to the CHP.

As reported here, the solo-vehicle rollover wreck happened around 3:15 p.m. Wednesday east of Double Springs Road in the Valley Springs area and brought traffic to a halt for about 30 minutes as the debris littered the highway. The CHP reports 54-year-old Matthew Jercich was behind the wheel of a 2004 Pontiac heading westbound when due to his intoxication he went off the roadway. Officer Toby Butzler states, “Jercich lost control of the car, which went into the oncoming traffic lane then hit a rock embankment and the vehicle overturned several times.”

Jercich and his passenger 60-year-old Sapphira Jercich, both from San Jose, had to be freed from the vehicle by fire personnel. The pair suffered major injuries and were flown to a Modesto hospital. He was arrested for DUI as Butzler reveals, “The officers that contacted him [on the scene] say it was very obvious that he was highly intoxicated.”

Highway 12 was down to one-way traffic control for nearly two hours during the evening commute as tow crews cleared the wreckage from the roadway.