Will It Be A Record Setting Precipitation Year? 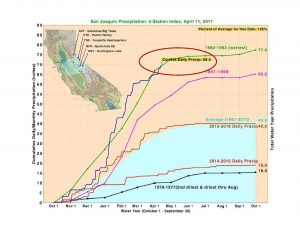 Sonora, CA — With more precipitation in the near-term forecast, the latest state figures indicate that this could potentially become the wettest year on record for the region.

The State of California breaks down precipitation numbers by region, and the San Joaquin Watershed Precipitation Area, which includes Tuolumne and Calaveras counties, has already received 68 inches this water year.

Tuolumne Utilities District Spokesperson Lisa Westbrook adds, “It is amazing the amount of water precipitation this region has received to date. It’s about nine inches away from the record setting 77.4 inches, and we’re supposed to be getting some more rainfall today, and through the next couple of weeks, on and off.”

Even if the record still stands by the time the summer months arrive in the Mother Lode, since the water year runs through the end of September, late summer and early fall storms could also theoretically put the region over the 35-year-old record.

For the latest information on the incoming weather, via the National Weather Service, click here.