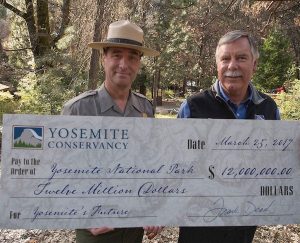 Yosemite National Park, CA – The Yosemite Conservancy has announced it is gifting $12 million this year; geared to fund 34 projects across the park.

One will be a study focusing within the 400-acre Ackerson Meadow, which Yosemite National Park acquired with conservancy support last year, amid a good deal of controversy, as reported here, due to criticisms from local government officials and ranchers. Several went on record to lament further diminishing of historic ranchlands and the assimilation of what was considered by many an already successful stewardship of the species-rich meadows to a park already challenged with maintaining and preserving its extensive holdings.

Commenting on the matter, Yosemite Conservancy Vice-president Jerry Edelbrock stresses that his group is not an advocacy organization and pretty much follows the lead of the National Park Service, which had long-identified the meadow, located along the Yosemite National Park boundary as a highly valuable resource.

Describing the new project, Edelbrock explains, “We are now funding some grants at what is included [resource-wise] at Ackerson because no one has really done a thorough study of the flora and fauna there. So it is an exciting time to discover what has been added to the park.” Further enthusing he adds, “I know the resource management team that is looking at it is very excited and believes that new species or at least highly significant species will be identified on that parcel, so it is a real gem.” Long known to be a haven for great gray owl the meadow also provides strong habitat for willow flycatcher.

Last year the conservancy, through one of its major campaigns, significantly provided $20 million in financial support towards Yosemite’s Mariposa Grove of Giant Sequoias restoration. Among this year’s funding projects is a new trail that will extend from an adjacent parking area into the grove so people can hike there instead of taking the shuttle bus.

“A couple of bridges will need to be constructed over the creeks…because it is an old stagecoach road [the trail] should be pretty easily accessible,” Edelbrock shares. This winter’s deluge of snow definitely slowed construction, which he now says will likely extend through the summer — when the grove was projected to reopen – into sometime in the fall, when he projects it will indeed open to the public.

The work scope includes converting remnants of the historic Washburn Road, built in 1879 as a stage-coach route from Wawona to the grove; constructing a new picnic area and repairing walls made by 19th century Chinese laborers.

Among the group’s other funded projects: a study of Monarch butterflies, now facing challenges that threaten the migratory species’ survival; restoration of bee, hummingbird, butterfly and other pollinators’ meadow habitat losing ground within the park to invasive grasses and other factors; the release of more Western pond turtles and red-legged frogs in Yosemite Valley and additional yellow-legged frog populations at alpine lakes, further aiding efforts, as reported here, to restore those species.

“Every year the National Park Service puts together a list of things that they would really like to have funded — that the park really needs — but it is way beyond their Congressional allocation for their budget,” Edelbrock confides. “So they give us the list and we determined which ones are really going to resonate for our donors, because all these donations are coming directly from individuals.”

He emphasizes that the conservancy has in recent years provided more than $113 million in grants, which to date, have accomplished 570 projects — most donations arriving in small dollar amounts from thousands of contributors.

The conservancy also provides significant funds to numerous arts, cultural and theater programs on an annual basis. These bring artists to teach workshops; provide entertaining and educational theater performances at the Valley Visitor Center; generate further funding from sales of trail maps, books, videos and other items. Conservancy staff also provides bear canister rentals and backcountry permits at the park’s wilderness centers as well as outdoor adventure programs. Many of these, Edelbrock points out, may be even more attractive for Mother Lode residents than tourists to enjoy because they provide numerous unique opportunities to “deep dive” into more ways of seeing, learning about and experiencing Yosemite.