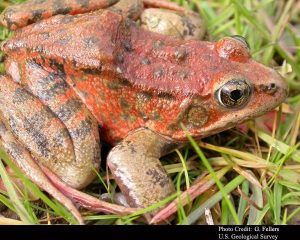 Yosemite National Park, CA — After 50 years, two more once-prevalent species are now being reintroduced in to their natural habitats within Yosemite Valley.

Joining a flock of Sierra Nevada Bighorn Sheep, which last March were released in Yosemite National Park, as reported here, are California Red-legged Frogs and Western Pond Turtles. Releases are underway and will continue over the next three years into suitable lake, river and meadow habitats.

The program is part of a multi-agency effort by the National Park Service (NPS), San Francisco Zoo & Gardens, the Yosemite Conservancy, US Fish & Wildlife, State Fish & Wildlife, and NatureBridge, which includes a new permanent frog and turtle breeding center at the zoo. Yosemite National Park Superintendent Don Neubacher calls the undertaking a landmark event as well as a historic opportunity to reestablish species that contribute to a healthy park ecosystem. The decline of both species can be traced to past actions now viewed as mistakes that have since been corrected through environmental restoration, according to park officials.

Among the root causes: nonnative, highly invasive and predatory American Bullfrogs, introduced to the Ahwahnee Hotel reflection pond in the 1950s were determined a leading cause of the Red-legged Frog’s demise. Too, a rapid rise in the raccoon population, due to open refuse sites in the 1970s created additional predators to dine on frogs and turtles. Western Pond Turtle habitat also suffered a harsh blow when large woody debris along the Merced River was cleared away.

As Yosemite Conservancy spokesperson Jennifer Miller explains, “We are learning more about wildlife practices…with new science, we are learning that the best decisions were not being made, so the great opportunity that we have now is essentially to be able to come in and help correct some wrongs that had happened in the past, and be able to bring these animals back into their natural habitat.” To that effect, she adds, “This year, Yosemite Conservancy donors are supporting this effort with a grant that we are provided to the Park of $185,000 — in total, in the past ten years the Conservancy has supported aquatic programs with $540,000.”

While some Red-legged Frogs are already in place at the Park, plans are to reintroduce a total of 4,000 tadpoles and 500 adult frogs over the next three years. It was a Red-legged Frog, in fact, that became known to the world as the infamous Jumping Frog of Calaveras County, as Miller enthuses. “It is just a wonderful connection…part of California lore, and Mark Twain helped make it famous…a frog that has not been in Yosemite Valley for 50 years — so it is a wonderful time to be able to bring it back and to have future Park visitors hearing it, and potentially seeing it, and caring more about the biodiversity of the Park.”

Over the next eight years, 100 adult Western Turtles will make their way in. Providing details of that timeline, Miller shares initial plans. “The turtles return to the Valley next week…brought back into the park with some schoolkids, and the first ten turtles that they reintroduce to the Valley are going to have some GPS equipment attached…so [researchers] will be able to track them during this early time – and see where they are spending their time in the Valley.”

To view images of both species, click in the upper left image box.