Support For Plastic Bags And Changes To The Death Penalty 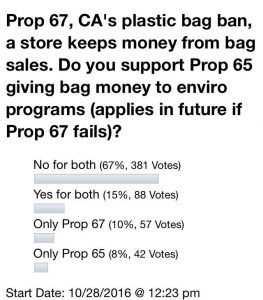 Recent informal MyMotherLode polls addressed the last thee of seventeen polls on the November ballot. The informal poll about Proposition 65 was combined witsh Prop 67, both about single use bags. The question notes that Prop 67 is about banning plastic bags in California and allowing a store to keep the money from the sale of bags to carry out goods. The poll question asked “Do you support Prop 65 giving bag money to [environmental] programs (applies in future if Prop 67 fails)?” The results were mostly (67 percent) against both Props but the remaining one third were split; 15 percent for both Props, 10 percent only for Prop 67 and just 8 percent in support of Prop 65.

The last of the 17 measures on the November 8th ballot to be addressed in an informal poll was, “Do You Support Prop 66: limits legal challenges to death sentences, 5yrs for Habeas Corpus, condemned inmates housed at any state prison?” The results was 63 percent yes, 31 percent No and 6 percent don’t know. Campaign spending related to the bill has been more than $12.6 million in favor and $11.4 million against.

Prop 66 changes procedures governing state court challenges to death sentences including designating superior court for initial petitions and limiting successive petitions. Such petitions are commonly referred to as “habeas corpus” petitions and differ from those considered in direct appeals because they involve claims that a defendant’s attorney was ineffective or the jury was unaware of information about the defendant’s situation. The measure seeks to limit the direct appeal and habeas corpus petition to process to within five years of the death sentence.

As of April 2016, an estimated 337 direct appeals and 263 state habeas corpus petitions were pending in the California Supreme Court. To help achieve the five year limit Prop 66 also requires appointed attorneys who take noncapital appeals to accept death penalty appeals among other things. The state estimates Prop 66 could save tens of millions of dollars annually, the voters guide states current spending is about $55 million annually on just the legal challenges to death sentences and additional varied costs related to continued incarceration.