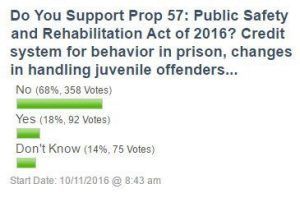 Five recent MyMotherLode informal polls relate to Propositions 57, 58, 59, 60 and 61 on the November ballot. Regarding Proposition Proposition 57, called the Public Safety and Rehabilitation Act of 2016, the informal MyMotherLode poll results were, 68 percent against, 18 percent for and 14 percent voted they don’t know. The measure is designed to reduce the state’s prison population by allowing a parole board to reduce sentences for non-violent categorized crimes. It is seen by proponents as another step to reduce the prison population following the earlier implementation of AB 109 and Proposition 47. The measure would also set up a credit system, or reward system, for good behavior and make various changes in handling juvenile offenders.

As reported here after hearing a presentation from District Attorney Laura Krieg, the Tuolumne County Board of Supervisors voted in favor of sending a letter against the passage of Prop 57 to the California District Attorneys Association. The Association is also opposed to the measure but a copy of the letter was also sent to Governor Jerry Brown who backs it. It was also sent to local representatives Senator Tom Berryhill, and Assemblyman Frank Bigelow.

On Prop 58 , MyMotherLode users were asked in another informal poll if they support authorizing schools to teach dual‐language immersion programs for both native and non‐native English speakers. A full 71 percent voted No, 23 percent voted Yes and only 6 percent voted they Don’t Know.

According to the voter’s guide in 2015–16, about 1.4 million California public school students, or 22 percent, are not considered fluent in English. Of those not fluent, or English learners, 17.6 percent are native Spanish speakers and 4.4 percent speak other languages. Prop 58 will modify some parts of Prop 227, passed in 1998, that generally requires public schools to provide English learners with one year of special, intensive English instruction before transitioning students into other English‐only classes. Though the measure generally does not require school districts to change how they teach English learners, it makes starting or expanding bilingual programs easier for all districts. The measure preserves requirement that public schools ensure students become proficient in English.

On Prop 59 the question was “Do you support increasing regulation of campaign spending and contributions? (Corporations should not have the same constitutional rights as human beings?)” The results were 69 percent yes and 26 percent no, with 5 percent not knowing.
Prop 59 is a legislative advisory measure only, it does not require any particular action by the Congress or the California Legislature.

The informal MyMotherLode question about Prop 60 asked “Do you support changes to the health and safety requirements for adult film production in CA?” The results were 60 percent no, 25 percent yes and 15 percent voted they don’t know. Prop 60 requires adult film performers to use condoms during filming of sexual intercourse. It also requires producers to pay for performer vaccinations, testing, medical exams and for them to post the requirements at the film sites. The financial impact is expected to reduce tax revenues by several million dollars due to producers leaving the state. One of the main reasons cited in opposition to the measure is the increased regulation and state spending the measure calls for. Estimates believe it will cost in excess of $1 million annually to enforce the regulations, only partially offset by new fees collected from violations.

The informal poll question about Prop 61 asked “Do you support State Prescription Drug Purchases be made at VA Prices? (Medi-Cal Exempt)” 51 percent voted no, 41 percent voted yes and 8 percent don’t know. As stated Prop 61 prohibits state agencies (except Medi-Cal) from buying any prescription drug from a drug manufacturer at any price over the lowest price paid for the same drug by the United States Department of Veterans Affairs, except as may be required by federal law. It applies to any program where the state agency is the ultimate payer for a prescription drug, even if the state agency does not itself buy the drug. According to California’s Quick Guide To Propositions, money raised for committees primarily formed to promote No on 61 have raised $108,954,074 and the Yes on 61 has raised $14,480,024. The top contributors to No on 61 are pharmaceutical companies such as Merck & Co., Inc.; Johnson & Johnson; Pfizer, Inc.; Amgen Inc. In favor of the measure is the Aids Healthcare Foundation and Democrats such as Bernie Sanders.

The news story about the MML polls on Propositions 51 and 52 is here.