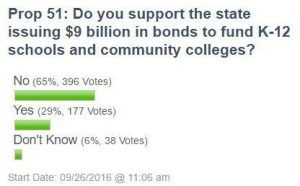 Two informal polls this week dealt with two of 17 propositions on the November ballot. Regarding Proposition 51 we asked, “Do you support the state issuing $9 billion in bonds to fund K-12 schools and community colleges?” The results were 65 percent No, 29 percent Yes, and 6 percent Don’t Know. Across the state Prop. 51 has also met with opposition, including from Gov. Jerry Brown.

State Superintendent of Public Instruction, Tom Torlakson says, “Prop. 51 allows local schools and community colleges to upgrade vocational education classrooms so students can train for good–paying careers and contribute to California’s growing economy. And, we owe it to our veterans to provide training and help them transition to the workplace.”

Opposition statements point out “Last June voters approved over 90% of local school bonds on the ballot, providing over $5.5 billion for school construction.” It is also noted that school enrollment is expected to decline over the next 10 years and “Large wealthy districts would receive the “lion’s share” because they have dedicated staff to fill out paperwork. This shuts out smaller, poorer districts that need help most.”

Regarding Proposition 52 the informal MyMotherLode poll question asked “Do you support extending the Medi-Cal Hospital Fee Program?” The results were 43 percent No, 32 percent Yes and 26 percent Don’t Know. Prop. 51 extends indefinitely an existing statute that imposes fees on hospitals to fund Medi-Cal health care services, care for uninsured patients, and children’s health coverage. If the Proposition does not pass the Hospital Fee Program, which began in 2009, will end January 1, 2018.

For most costs of the Medi‐Cal program, the state and the federal government each pay half of the costs. In some instances, the federal government pays a greater share of the costs than the state. California must follow various federal laws and requirements in order to receive federal funding for Medi‐Cal, in 2015-16 the hospital fee revenue of $4.4 billion was matched with federal Medi‐Cal funding, resulting in $8.1 billion in total Medi‐Cal payments and grants to hospitals. The opposition says there is not sufficient oversight or accountability of the Medi-Cal funds.