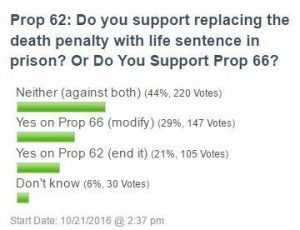 In several informal MyMotherLode polls, the questions related to November’s Propositions 62, 63, 64 and 66. Propositions 62 and 66 both deal with California’s death penalty. Prop 62 seeks to repeal the death penalty and change the punishment to life imprisonment without possibility of parole. The Prop also increases the portion of life inmates’ wages that may be applied to victim restitution. The states estimates a net and ongoing reduction in state and county criminal justice costs of around $150 million annually within a few years but notes that figure could vary by tens of millions of dollars. Due to legal issues surrounding the state’s lethal injection procedures, executions have not taken place since 2006. The state is currently in the process of developing procedures to allow for executions by lethal injection to resume.

Our informal poll asked “Do you support replacing the death penalty with life sentence in prison? Or Do You Support Prop 66?” The results were Neither (against both) 44 percent, 29 percent are for Prop 66, only 21 percent were for Prop 62 and 6 percent didn’t know.

A separate poll will be conducted on Prop 66 which changes procedures governing state court challenges to death sentences, including limiting successive petitions and appeals. From 1978 to April 2016, 930 individuals were sentenced to death, meaning the death was a first degree murder, being planned and deliberate or involving kidnapping, and had other “special circumstances” such as an additional murder or financial gain also proved in court. The voter guide states “In recent years, an average of about 20 individuals annually have received death sentences.” Various state regulations result in increased security costs for the 748 inmates currently under a death sentence. Unlike most offenders they are required to be placed in separate cells; male inmates are generally required to be housed at San Quentin State Prison (on death row), female inmates are housed at the Central California Women’s Facility in Chowchilla.

Prop 63 is a measure with several gun control regulations. The informal My MotherLode poll asked “Do you support $25mil for Prop 63: 5 days to report lost/stolen gun, forbid large–capacity ammo magazines, Natl Background Checks, license for ammo sales, convicts give up firearms?” An overwhelming majority, 74 percent said No, 24 percent were in favor and a very minimal 2 percent voted Don’t know.

Section 30371. (a) of the Prop calls for $25 million from the General Fund as a loan for the start-up costs of implementing, operating and enforcing the provisions of a newly defined ammunition authorization program. It also requires before July 1, 2017 that large-capacity magazines be remove from the state or a person can be charged a fine up to $100 per magazine and/or up to one year in jail. The Prop seeks to make the theft of a gun chargeable as a felony, and makes it illegal for a person charged with a gun theft to own any firearms. The Prop requires the Department of Justice’s participation in federal National Instant Criminal Background Check System and imposes new penalties if any person does not notify law enforcement if their gun is lost or stolen within 5 days. Lastly beginning January 1, 2018, it would require courts to inform defendants, at the time of conviction, that their conviction deprives them of the right to own a firearm for 10 years or permanently. It requires any firearms they own to be disposed of, generally within 14 days or less, and the court to be provided with documentation about the disposal.

While there is more support for not making any changes to current gun laws or the death penalty, legalizing recreational marijuana is a different matter. The informal poll asked “Do You Support Regulation and Taxation of Marijuana by Any Adult 21 or Older as Defined in Prop 64?” A full 59 percent of 642 votes said Yes, another 39 percent voted No and only 2 percent don’t know.

As reported here, Mother Lode Congressman Tom McClintock is in support of Proposition 64. He said, “I abhor the use of marijuana, and believe we should do everything we can through education and persuasion to discourage its use. But our current laws have failed us, and have created a violent and criminal black market that actively and aggressively markets to young people. Legalization takes the criminal profit out of the equation, and allows us to regulate marijuana the same way we currently regulate alcohol. This should make it more difficult for minors to obtain marijuana; it should remove illegal cultivation from our neighborhoods and forests and move it to normal agricultural operations; and it should replace the criminal gangs that traffic marijuana with law-abiding farmers and shopkeepers.” Calaveras has its own measures related to marijuana as detailed here.

The news story about the informal MyMotherLode polls on Propositions 51 and 52 is here.