Favor For Increasing Oversight But Not Taxes 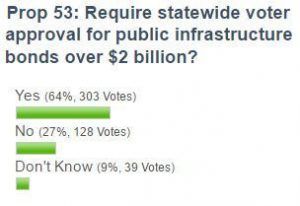 Regarding Proposition 54, which would prohibit the legislature from passing a bill unless published on Internet for 72 hours, the results were 79 percent in support, 13 percent not supportive, and 8 percent don’t know. Known as the California Legislature Transparency Act, Prop 54 requires the Legislature to record its proceedings and authorizes the use of the recordings for any legitimate purpose, without payment of any fee to the State. The fiscal impact of Prop 54 is estimated between $1 and $2 million with costs of about $1 million annually to make the videos available on the Internet. In opposition a No on 54 statement says, “…requiring the legislature to wait three days before voting on a bill will give powerful lobbyists and well-funded special interests time to launch campaigns to attack bipartisan compromises.”

Proposition 55 will extend a temporary income tax increase by 12 more years. The related informal MyMotherLode.com poll results were 60 percent don’t support 32 percent do support and 8 percent don’t know. A May PPIC poll of 1,704 California adult residents asked “As you may know, voters passed Proposition 30 in November 2012. It increased taxes on earnings over $250,000 until 2018 and sales taxes by one quarter cent until 2016. Do you favor or oppose extending for 12 years the tax increase on earnings over $250,000 to fund education and health care?” The results were 64 percent in favor and 32 percent opposed with 4 percent not knowing. Only 58 percent reported likely to vote on the matter, 80 percent of Democrats were in favor and 66 percent of Republicans and 68 percent of independents were opposed.

The current informal poll on Prop 56 to increase cigarette tax by $2.00 per pack, including other tobacco products and electronic cigarettes, is split 53 percent against to 46 percent in support. The poll relates to a general question in PPIC’s poll in May which asked, “In general, would you favor or oppose increasing the tax on the purchase of cigarettes to fund health care?” 69 percent said yes, including the majority of Democrats (82%), Republicans (53%) Independents (68%) and 67 percent of those who answered were likely voters. In PPIC’s January poll, 53 percent of adults said that raising cigarette taxes to pay for health care was very important to them.  In June 2012, Proposition 29 to raise the state cigarette tax by $1 per pack to fund cancer research failed to pass by 33,209 votes, short only .2 of a percent.