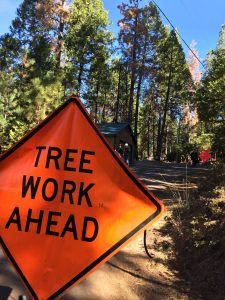 Themed “Tree Mortality: There Is Hope for the Future,” the recent tour made pit stops near Mi-Wuk Village and Pinecrest, where a roster of experts frankly spoke about the enormity of the growing catastrophe and how various agencies are collaborating to cope with it while working to establish new best practices.

Officials from Tuolumne County, the US Forest Service and CAL Fire as well as the volunteer-led Yosemite Foothills Fire Safe Council were among the participants who spoke; along with managers from Sierra Pacific Industries and PG&E. It was sponsored by the Tuolumne County Alliance for Resources and Environment (TuCARE) and Yosemite-Stanislaus Solutions (YSS).

Tuolumne County’s tree mortality task force, aligned with the state-level task force, is one of the leading counties responding to the tree mortality emergency. Its response plan taps state funds and integrates efforts and resources with CAL Fire, PG&E and other utilities such as Tuolumne Utilities District (TUD). Although funding to help private landowners remains a major issue, efforts are in place and a few large-scale tree removals underway in the county, as reported here.

Big Ideas and Cranes At Work

At the initial stop, tour-goers were treated to a demonstration by a PG&E contractor impressively using a master tree climbing crew and a monster crane to mechanically take down dead big trees in a Mi-Wuk Village neighborhood. (To view video of the crew and crane with commentary, click here.) A new program to help low-income and disabled landowners remove hazard trees around their homes was also discussed. (Details and links of this program, called TMAP, are available by clicking here).

Addressing the tour at Mi-wok Ranger District headquarters, Stanislaus National Forest Supervisor Jeanne Higgins did not pull any punches about how complex managing just shy of 900,000 drought-weakened bark beetle-infested forest acres has become with warming temperatures and increased fire risk. “Large wildfires present huge challenges in terms of response and recovery actions..but this situation that we are facing here in the Sierras is unprecedented…and presents a problem that we cannot solve with our traditional approach.”

Back in June, the US Forest Service reported that an additional 26 million trees have died in California since October 2015 — all in a six-county spread across 760,000 acres in the southern Sierra Nevada region. Adding that to the 40 million trees that died statewide from 2010 to October 2015 brings the estimated dead-tree total to historic die-off numbers that now probably exceed 66 million. Higgins further estimated a current mortality rate of 90 to 95 percent in the pine belt on the south side of the Stanislaus. She said, that since shifting the focus of her department’s work away from Rim Fire recovery to the daunting task of dealing with dead trees, “We have been cutting trees every day since then — close to 30,000 trees on the national forest in the last year.”

Setting a tone that continued to echo through the comments of every other speaker for the rest of the day, Higgins stated, “It takes a community to actually respond to this and we need to bring our best thinking to this…everybody is scratching their heads. We need to come up with strategies and tactics that are going to be far different from what we have employed in the past…and also incorporate the use of prescribed fire.” She added that past fire prescriptions, which did not include dealing with drought conditions, are being retooled to address complex challenges both on the ground and with managing risk.

Along for the tour, Jodi Axelson, an entomologist recently hired as a Cooperative Extension specialist at UC-Berkeley, piped up that her department will be developing an extension program to address the infestation issue.

Sharing expertise on dealing with outrageous bark beetle breakouts in British Columbia, she said insecticide injections and anti-aggregation pheromones are more effective in protecting individual trees. For stands with low numbers of beetles just starting to increase in population, Axelson advised, “You can make a dent by cutting down the trees that are still green…when they are full of beetles, even if the crown is green, they are dead — they just don’t know it yet.” She further recommended that an active sanitation program, to remove these trees — along with the visibly dead ones — especially while the beetles are wintering in them, prevents those populations from reemerging in spring. (Click here for more details from her talk.)

While speaking for CAL Fire, Tuolumne-Calaveras Unit Forester Adam Frese highlighted advice and recently streamlined regulations that enable landowners to remove trees on their properties by filling out a one-page form and site map, (detailed here). He called it a credit to the foresters, loggers and local timber industry facilities that there have been very few issues after over a thousand such permitted-projects have been enacted through his unit office. Along with helping remove debris from tree-felling projects Frese said that CAL Fire remains busy doing outreach and inspections to ensure that residents are doing their part to maintain defensible space around their homes. He also credited area fire safe councils for their collaborative efforts in helping fund and execute fuel break projects in fire-sensitive areas such as the one that helped contain the Oak Fire near Sonora last summer, as reported here.

Onsite at the USFS experimental forest in Pinecrest, ecologist Eric Knapp stood in a clearing on a formerly fire-suppressed forest plot where scientifically determined, variable thinning to a much lower tree percentage, along with debris removal was subsequently followed up with prescribed fire. The result was the creation of a demonstration forest area that was more resilient to drought, wildfire and bug kill. He stressed that fewer trees, more site management and returning fire to its historical role were all key tools that needed to be used together.

Colleague Malcolm North, chiming in, stated experiments across western forests are showing that maintaining spatially variable tree patterns in restored forests are more in line with how they naturally developed; they are also conducive to providing habitat for sensitive species like the spotted owl. USFS silviculturalist Ramiro Rojas dryly opined, after sharing a dire report of nearly complete pine devastation due to tree mortality in the Sierra National Forest where he works, that such strategies should be enacted while there are still trees.

Tuolumne County Supervisor Randy Hanvelt offered his takeaway from the experimental forest that the tree mortality crisis came from forest managers simply not doing enough for too long.

Said Hanvelt: “The trees are healthier here [in the demonstration area] so they are withstanding this bark beetle better than our standard forests, which are the overgrown forests. So it is just a clear answer to me that we really to be need to be doing is upping the pace and scale of everything that we are doing in the forest to thin it, make it look more like it did 100 years ago, and somehow introduce fire back in a judicious fashion…and do mechanical removals where there is a place. The bark beetle kill is a result of not doing enough.”

For speaker highlights from CAL Fire/Frese and USFS/Knapp, along with Hanvelt commentary, click here. To view tour images, click the slideshow link in the upper left image box.

The tour was followed up last Friday by a summit at the Mother Lode Fairgrounds, featuring some of the same speakers. Mother Lode lawmakers Congressman Tom McClintock and Assembly Frank Bigelow were also featured guests, as reported here.