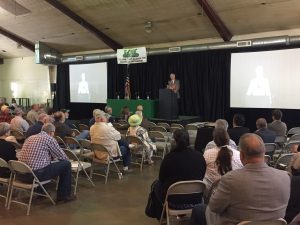 Sonora, CA — Several government and industry leaders concerned about the health of the surrounding forest area were featured speakers at the Tuolumne County Alliance for Resources and the Environment (TuCare) Natural Resources Summit.

The theme of 2016 was “There is Hope For The Future” and much of the discussion centered around the bark beetle epidemic.

District Four Republican Congressman Tom McClintock, the first featured speaker, aimed much of his criticism at government rules and regulations. “They have made it impossible for us to properly manage these lands and we now have four times the tree density that the land can support and the trees are falling victim to drought, disease, pests and ultimately catastrophic wildfire,” said the Congressman.

District Four Assemblyman Frank Bigelow followed McClintock, and spoke about his efforts to help convince state lawmakers that funding is needed in the budget for tree removal. Bigelow stated, “If the numbers are correct, by what all people are saying, 66-plus million trees are dead (in California)…that’s almost 1 1/2 times the population of people in the state. My gosh, this is huge.”

Other featured speakers included Stanislaus National Forest Supervisor Jeanne Higgins and CAL Fire Regional Resource Manager for the Southern Region, Rick Carr. CAL Fire is currently in the process of reviewing grant projects to be funded with SRA fire fee money. Carr noted that there are 264 applications and 25% are from the Tuolumne-Calaveras area.

Later there was a Tree Mortality Panel, which featured Dan Tomascheski of Sierra Pacific Industries, Steve Brink of the California Forestry Association, Jim Branham of the Sierra Nevada Conservancy and Rick Spurlock of the California Biomass Energy Alliance.

The forum was held Friday morning at the Mother Lode Fairgrounds.