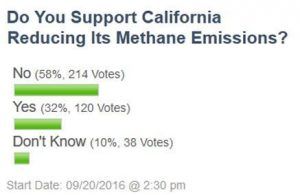 An informal MyMotherLode poll asked; “Do You Support California Reducing Its Methane Emissions?” Over half responded No, and 10 percent voted Don’t Know.  As recently reported in “Brown Signs Legislation Regulating Wide Range Of Pollutants” here newly signed legislation requires a 40 percent reduction in methane by 2030. The bill, SB 1383, requires the state board, no later than January 1, 2018, will begin implementing a yet to be developed strategy to reduce emissions of methane by 40%, hydrofluorocarbon gases by 40%, and anthropogenic black carbon by 50% below 2013 levels by 2030. The bill also imposes state-mandated local programs be created to reducing organic waste in landfills by 50 and then 75 percent by 2025.

Based on emission estimates from the Inventory of U.S. Greenhouse Gas Emissions and Sinks: 1990–2014, landfills account for 20 percent of methane emissions, oil and gas contribute 33 percent and livestock contributes 30 percent- 22 percent from enteric fermentation plus 8 percent from manure management.

A Department of Energy fact sheet on methane says “Methane is the key constituent of natural gas, is a potent greenhouse gas (GHG) with a global warming potential more than 25 times greater than that of carbon dioxide. Methane is the second most prevalent GHG emitted in the United States from human activities, and nearly one-third of those emissions comes from oil production and the production, transmission and distribution of natural gas.” While the EPA and other agencies address plans and goals for capturing and reducing methane released when oil and natural gas are extracted and transported the USDA has more to say about animals produced methane.

The normal digestive process of domestic livestock such as cattle, sheep, goats, and other ruminant animals that have special type of stomach to digest food and their burps release methane. Their manure also releases methane in to the environment. A USDA report notes the use of methane digesters, biogas recovery systems that use methane from manure to generate electricity, have not been widely adopted in the United States because there is no way for operators to make a profit doing it. The USDA says “Burning methane in a digester reduces greenhouse gas emissions from manure management.” The report provides an economic model that illustrates how dairy and hog operation size, location, and manure management methods, along with electricity and carbon prices, affect the profitability of a ranch. It concludes, “The model shows that a relatively moderate increase in the price of carbon could induce significantly more dairy and hog operations, particularly large ones, to adopt a methane digester, thereby substantially lowering emissions of greenhouse gases.”

The California Air Resources Board (ARB) provides current detailed information about carbon credits and defines various situations where Livestock Projects could qualify here. The Protocol has been in place since October 2011 and was updated September 20, 2016.