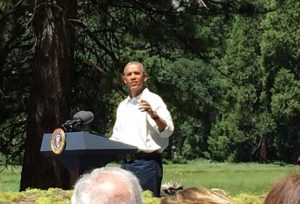 Update at 7:45pm: You can see video of President Obama’s speech at Sentinel Bridge in Yosemite by clicking the “play video” tab below the photo in the upper left hand corner.

Update at 6:30pm: You can hear the entire audio of President Obama’s speech in Yosemite National Park by clicking the link below:

Update at 12:30 p.m.: With the beauty of Yosemite Falls behind him, President Barack Obama addressed a large crowd at Yosemite National Park. The President spoke this morning from the spot where Teddy Roosevelt arrived by horseback in 1903. The First Family is visiting the park to celebrate Father’s Day and the 100th Anniversary of the National Park Service. The President took the opportunity to address what he calls one of the biggest threats to future generations.

“The biggest challenge we are going to face in this place and places like it is climate change. Make no mistake, climate change is no longer a threat, it’s already reality,” warned President Obama. He relayed his conversation with several Yosemite Park Rangers, stating, “Here in Yosemite, meadows are drying up. Bird ranges are shifting farther northward. Alpine mammals, like pikas, are being forced further up slope to escape higher temperatures. Yosemite’s glacier, once a mile wide, is now almost gone.” With regards to the current fire season, the President pointed out,  “We’re also seeing longer, more expensive, more dangerous wildfire seasons and fires are raging across the West right now.” Noting that the parks belong to all citizens, Obama emphasized, “We have to have the foresight and the faith in the future to do what it takes to protect our parks and this planet for generations to come.”

Update at 9:45 a. m.:  The stage is set for President Barack Obama to address the media in Yosemite National Park. Clarke Broadcasting News Director BJ Hansen is at the park awaiting the President to take the microphone. Click here for his report Hansen-POTUS-Second-Report from Yosemite . Listen to an earlier report from BJ Hansen below.

Original post at 9 a.m.: Yosemite, CA – The First Family woke up to the scenic landscapes of Yosemite National Park.

The President, First Lady and their two daughters arrived last night on Air Force One at the Merced County Castle Airport and then took a helicopter to the park.  Their visit will continue through Sunday with hiking on the agenda.  As first reported  by Clarke Broadcasting, the visit is to celebrate Father’s Day and the 100th Anniversary of the National Park Service. News Director BJ Hansen is at the park to cover President Obama’s historic visit and file reports: Click here (BJ-POTUS-Yosemite)

White House officials report President Obama has just finished his morning workout and his motorcade is heading from the park’s rec center to the Majestic Yosemite Hotel (a.k.a. Awhanee Hotel), as visitors along the route wave to greet him.