A Mother Lode Fairgrounds Board Member Resigns Amidst Ongoing Conflict 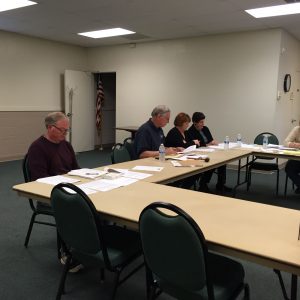 Sonora, CA – Wednesday’s Mother Lode Fair Board meeting started off with the announcement that member Bryan Adcox had resigned, with no reason given, and three were absent leaving the board without a quorum to take any formal actions.

Two of those who were absent,  Jan Costa and Peggy Lee, are at the center of the controversy. Harassment and accusations of misappropriating funds from Costa and Lee, according to Fair Manager and CEO Stacey Dodge, have caused her and Office Manager Michelle Keefe to file complaints against them to the California Department of Human Resources.  Additionally, there are complaints regarding the board’s spending money on legal fees and travel from the fair’s already tight budget.

The fireworks began at the meeting when Melinda Fleming, the Executive Director of TuCare, a non-profit natural resources education organization that utilizes the fairgrounds, was scheduled to give a general Ag presentation. Instead she read a letter accusing the board of directors of diverting and budgeting away funds from agricultural needs to legal fees, and calling that “unacceptable.”  Fleming also blasted the board for wasting funds on excessive scrutiny of staff activities, and she called for board members to be removed “if they can’t or won’t cease and desist.”  Board President Dan Brown took issue with the letter contending the board had been blindsided…and the sparring began with Brown stating, “We have not misappropriated any funds.  It is an appropriate use of funds.”  Fleming countered, “Taxpayers have a right to voice their opinion, and we are doing that.” Brown insisted, “Get your facts straight.”  Fleming shot back, “My facts are straight, too much funds have been spent on things other than Ag related business at the fair.” The argument ended with Brown thanking Fleming for her opinion.

Board Vice President Missy Marino spoke up admitting mistakes had been made but called for both sides to unite, citing, “We’ve spent money where it wasn’t necessarily budgeted.  We are making sure that doesn’t happen again because we are limited in our funding.  So, we all need to work together so that the fair can be a great place for the community.”

Dodge agreed stating, “I would really like to move forward…The scrutiny that a few board members are presenting, we need more trust.  I think if we could get past that barrier things would be moving in the right direction.” Brown noted that before that can happen, staffs complaints to the state must first be completely resolved. Dodge says she received a letter from CalHR in February acknowledging Costa and Lee’s treatment as “discourteous” but that it did not substantiate claims of a hostile work environment.  However, there has been no decision on Keefe’s case.

On a related note, Fleming says a petition with over a hundred signatures calling for board members Costa and Lee’s resignation has been sent to Mother Lode Assemblymember Frank Bigelow’s office but no response has been received yet.