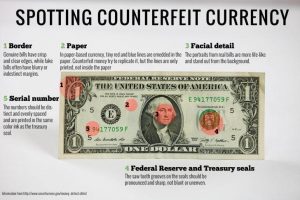 Sonora, CA — A Jamestown woman arrested this week for narcotics was also caught with a fake bill upon entering the Tuolumne County Jail prompting the sheriff’s department to issue a warning to the public.

There have already been five cases this month involving counterfeit $10 and $20 bills in the county. Several of those found with the fake cash on hand have been arrested, according to the sheriff’s department.  Ironically, one person got caught with a bill while being booked into the county jail. As reported on Wednesday, 38-year-old Stephanie Martinez of Jamestown was arrested after a deputy pulled her over for speeding and failure to signal on Standard Road in Sonora on Tuesday evening. At the time of her arrest, Martinez offered up to the deputy two bags of methamphetamine, .35 grams of heroin, some marijuana and $84 in cash. However, the counterfeit cash was not found until her booking. Sgt. Andrea Benson states, “We did find Martinez in possession of a counterfeit $10 bill when she was brought into the jail. We do use counterfeit markers and it did prove to be fake bill.” Sgt. Benson adds that when Martinez was questioned about the bill “she stated she did not know it was a counterfeit bill.”

The sheriff’s department wants to warn the public and business owners about the phony cash. It has provided these tips to spot bogus money:

Security Ribbon(On New $100 only)- The newly printed $100 has an extra security feature. There is a visible blue security ribbon down the right middle of the bill that is 3D. If you move it back and forth, you will actually see the number 100 and a variety of little bells will move from side-to-side as the bill shifts.

Serial Numbers should correspond to Printing Year/Series- The last thing to check on a bill, is to make sure the serial number matches the supposed series/run year printed on the bill. Each letter that starts a serial number for a bill corresponds to a specific year. Just be sure to check and make sure the series year stated is a correct match with the letter that starts the serial number, and vice versa Here are the letters and the corresponding years/runs they should match with. 1. E = 2004 2. G = 2004A 3. I = 2006 4. J = 2009 5. L =

Sgt. Benson notes that counterfeit detector pens can be purchased and used to help detect fake bills. If you receive any counterfeit money report it to local law enforcement immediately. Sgt. Benson adds, “If a person tries to pass a fraudulent bill at a business, we asked that the clerk hold the bill and call law enforcement. Don’t hand the bill back to the person. It will help in investigating the crime.”