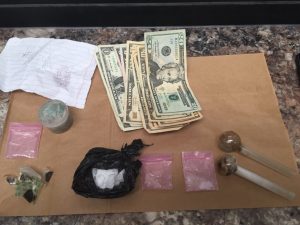 Sonora, CA — A traffic stop led to the arrest of a man and woman after deputies found drugs on both of them and in the car.

A Tuolumne County Deputy spotted a 2000 Honda Civic around 11:30 p.m. Tuesday speeding along Camage Avenue, then turning onto Standard Road without signaling and pulled it over.  He questioned the driver, 38-year-old Stephanie Martinez of Jamestown about the violation and found her passenger, 45-year-old Rafael Godinez Jr. from Sonora, had a misdemeanor warrant for domestic violence.  As Godinez got out of the car, the deputy noticed a small bag of methamphetamine on his seat. Both were questioned and Martinez handed over two bags totaling 5 grams of methamphetamine, .35 grams of heroin, some marijuana and $84 in cash.