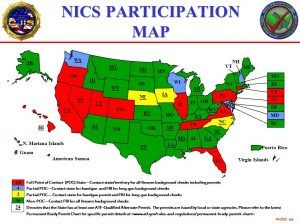 In our informal myMotherLode poll that asked do you support “Background checks required for gun purchases online and at gun shows?” The results were: 79 percent of 749 votes support it, 20 percent do not support it, 11 votes or 1 percent don’t know.

California is one of several states that conducts background checks for all sales even a one time sale between private sellers. The background check is regulated by the state as detailed here, not the National Instant Criminal Background Check System (NICS).

Handguns are not permitted to be shipped through the US postal service but other guns are, UPS and FedEx have procedures for shipping only to licensed gun dealers. Whether a gun is purchased online from anther state or country it is illegal to ship any type of gun, antique or not- even from a family member, directly to your home or business address. Instead, you will need to choose a nearby firearms dealer to ship the gun to, and the dealer must be a Federal Firearms Licensed (FFL) gun dealer. The dealer will do the required background check on you and then you could pick up the gun. The seller will also be required to complete forms with Customs and Border Protection as detailed here.

By law, a FFL gun dealer, selling in other states, can complete a sale to a customer if the background check comes back clean or has taken more than three days to complete. To handle an average of more than 63,000 background checks requests per day, President Obama noted before his related executive order posted here, that 50 percent more workers should be hired for a total of 690 people performing the required checks 24 hours a day 7 days per week.

Current law prohibits individuals from buying a gun if, because of a mental health issue, they are either a danger to themselves or others or are unable to manage their own affairs. The Social Security Administration (SSA) is now expected to develop rules to report records to the NICS of the 75,000 people each year who have a documented mental health issue, receive disability benefits, and are unable to manage those benefits because of their mental impairment, or who have been found by a state or federal court to be legally incompetent. Any new rules are also supposed to provide for exemptions in some situations.

The expanded NICS Federal “mental health prohibitor” disqualifies certain individuals from shipping, transporting, possessing, or receiving a firearm will include limited HIPAA protected information from certain health professionals, according to a Department of Health and Human Services (HHS) final ruling here.  The HHS notes that it continues to support efforts by the Administration to dispel negative attitudes and misconceptions relating to mental illness and to encourage individuals to seek voluntary mental health treatment. Similar rules are already in effect for California, the law is detailed here. New laws related to guns that went into effect in California were detailed here.

As reported on Jan. 12, 2016 a new Field Poll found that a majority of California voters are in favor of tougher gun laws but only 54 percent of Californians equate stronger gun laws with reducing violent crime with 44 percent saying they have no effect. A recent informal myMotherLode poll noted a very high rate of gun owners voted on our poll. The results were published here.

In other polls the recent informal myMotherLode poll “Who Should Win The Democratic Presidential Nomination?” found Bernie Sanders leading Hillary Clinton 35 percent to 14 percent. The Tuolumne County election department reports as of December 2015; 42 percent of 28,202 voters are registered as Republican, 31 percent are registered Democrats and 21 percent have no party preference. Notably 51 percent voted they did not care who wins the Democratic Presidential Nomination. In contrast a Jan. 6 2016 Field Poll of likely voters in California’s Democratic Primary found 46% in support of Hillary, while 35% support Sanders.