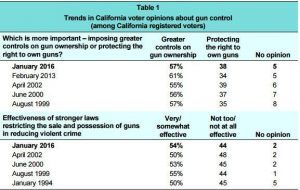 San Francisco, CA – A majority of California voters remain in favor of tougher gun laws in the wake of the deadly attack in San Bernardino on Dec. 2.

A new Field Poll finds that 57% of voters approve stricter controls on gun ownership over protect the rights of Americans to own guns (38%). There is also strong bipartisan support for two state proposals that target greater restrictions on gun ownership.  One, with 80 percent in favor, requires a background check for anyone buying ammunition. The other, with 75 percent approval, would prohibit anyone to buy a gun who is on the federal government’s “do not fly” list.

Additionally, the trend continues with 58 percent favoring outlawing large-capacity ammunition magazines and 56 percent expanding the definition of the state’s assault weapons ban to include semi-automatic rifles with detachable ammunition magazines.