Many Guns In The Mother Lode 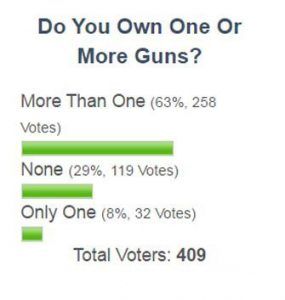 Related to news that gun sales have been on the rise in California, myMotherLode posted an informal poll asking “Do You Own One or More Guns?” The results were 63 percent more than one, 29 percent none and 8 percent only one.

A formal national study of trends in gun ownership was released in March 2015 by the National Opinion Research Center (NORC) based at the University of Chicago as part of its General Social Surveys. The GSS, funded primarily by the National Science Foundation, has been done nearly every two years since 1972. In 2014 it reported only 32 percent said they had a gun in their home with 22 percent of Americans reporting personally owning guns, down over the last 40 years from 51 percent.

There are many factors that Tuolumne, Calaveras and those interested in the Mother Lode would represent a very high rate of ownership in our informal poll. According to the NORC’s analysis “one of the main reasons for the decline in household firearm ownership is the decrease in the popularity of hunting.” Having a member in a household who participates in hunting is down from 31 percent in 1977 to just 15 percent in 2014. The sport is practiced locally in many areas detailed here.

The GSS survey results noted households in rural areas tend to own more guns with the highest rate, 55.9 percent, in counties with no town over 10,000. For the 12 largest metropolitan areas the rate is 14.8 percent. White people tend to have more guns compared to African Americans (39 percent compared with 18 percent), and non-Hispanic people more than Hispanic people (36 percent to 15 percent). According to the 2010 U.S. Census, Tuolumne County had 87 percent who identified themselves as white, 1.9 percent as Hispanic, and .4 percent African American.

The GSS survey also found the greater the household income, the more likely there was to be a gun in the home. Only 18 percent of households making $25,000 or less having guns and 44 percent of homes making $90,000 or more having them—a 26-point jump. The 2010 Census reported Tuolumne’s median household income as $46,295, lower than the State average of $57,708 but Sonora was ranked by Bloomberg as the 36th wealthiest small town in the United States. Details about the ranking are here.

The Associated Press report about the GSS survey noted about half of Republicans live in households with guns while for Democrats it is 25 percent and Independents its 23 percent. The Tuolumne County election department reports as of December 2015; 42 percent of 28,202 voters are registered as Republican, 31 percent are registered Democrats and 21 percent have no party preference.

In other news a report by the San Francisco Chronicle about California Department of Justice records show that gun sales doubled between 2010 to 2014, when the state had nearly 500,000 gun transactions. Some of the spike is attributed to fears of more gun control legislation, detailed in the news story here.