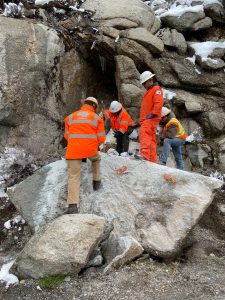 Tuolumne County, CA – All the Caltrans-maintained mountain passes reopened this afternoon, but not before crews had to bust a boulder on one of the roadways.

While clearing the snow and ice on Highway 108/Sonora Pass in Tuolumne County yesterday (Wednesday, May 11), crews discovered a large boulder blocking the roadway. In order to quickly remove it, the rock was broken into manageable pieces, as shown in the image box photo. That allowed for its opening today at 2 p.m.

Also opened was Highway 4/Ebbetts Pass in Alpine County. We reported here yesterday that the passes had been closed for the winter season since December 6th.

There is still no word from Yosemite National Park as to when Highway 120 Tioga Pass may reopen for the spring season. Crews continue to clear snow and debris after recent high-country storms in the region. Park officials note that most years, the pass does not open until late May or early June.