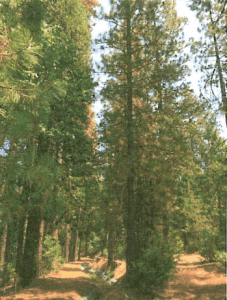 While the newly available funding does not yet make assistance available to private landowners, Riggs says it will greatly enable public entities such as the county as well as local water and school districts to remove drought-killed and dying trees on or along public lands where they pose a public hazard; such as adjacent to essential county roadways, utility and communications systems.

Qualifying the financial arrangement, Riggs explains, “What that means is that there is a 25 percent cost share — we have already started [removing trees] — but it now gives us a way to be reimbursed for a part of that, which will allow us to go further, and begin to remove hazardous trees anywhere within public lands.” She points to work already in progress by the Tuolumne Utilities District (TUD), as previously reported, which has taken out 200 trees and also identified another 500 dead and dying trees within proximities that pose a threat the district’s ditches and flumes. As she notes, “They will now have a way to help be reimbursed for the cost of removing those trees and getting them out of there.”

Riggs adds that county staff is still working on creating a local action plan that will be presented at the next board of supervisors meeting Dec. 15. While a December date for the state task force on tree mortality has not been finalized, Riggs states that she is satisfied with state agencies’ responses since its Nov. 16 meeting (reported here), and plans to continue advocating the importance of facilitating some kind of assistance for private landowners, perhaps through a similar cost-share arrangement.

Opining that the state was able to step up under the drought emergency and help provide relief for those whose wells have gone dry, Riggs compares the current state of the drought to the mushrooming rates of dead and dying trees. She calls the tree mortality disaster “the drought disaster on steroids.”

While collecting related data during recent site visits to county landowners now dealing with tree removal operations, Riggs became aware of operators out doing the work who do not have the proper credentials. Ahead of hiring a tree removal operator, she cautions owners to request copies of their license and certificate of insurance. After all, she says, “If a tree falls on a home, it could cause not only property damage, but also injure or kill someone — so we want to make sure not only that these people are insured, but they are truly licensed.”

Riggs indicates that the county is assembling resources and processes on tree mortality that will be shortly available online. In the meantime, those dealing with the issue may want to bone up on recent moves by the Board of Forestry and Fire Protection to relieve red tape and reduce property owners’ costs through a streamlined process that involves help from Cal Fire, as reported here.